Any quarterback playing the Eagles right now I want a piece of and I’m not one to usually play Flacco. The numbers can’t be ignored any longer. He’s thrown a whopping 99 times in his past two games versus Miami and New England. Both pretty stout run defenses and the Eagles currently are 12th in rush DVOA. The Eagles pass defense is 27th in yards allowed per pass attempt. Since the Ravens have decided to basically abandon the run as of late, Flacco is in a great spot here to exceed value. His price gives you so much flexibility to pay up for running back and a top-tier wide receiver. He’s also a great pivot off of popular options like Alex Smith and Phillip Rivers. I would lock in Flacco to get 300 yards and 2 touchdowns and at this price that’s more than enough for me to put him in a majority of my lineups.

Ownership from Thursday Lock Contests on FantasyAces/FantasyDraft: 17 percent and 3 percent

The game between the Cardinals and the Saints has one of the highest implied totals on the slate with both teams projected to score over 23 points. Everyone wants to play David Johnson this week. Can you blame them? He’s the 1a or 1b at the running back position who has the highest floor of any player on the slate because of his usage. But while most people will be looking to pair a different quarterback with DJ, I’m trying to encourage you to get ALL the exposure to this Cardinals offense in a great spot. The Saints have allowed quarterbacks all season to put up big numbers against them (see: Jared Goff, week 12). They have the 28th pass defense DVOA and are 29th in yards allowed per pass attempt. The Cardinals run a high pace, about 70 plays per game, and the Saints run at an even higher pace. This game should hit it’s 50 over/under fairly easily and that’s why I want some Palmer exposure this week.

Ownership from Thursday Lock Contests on FantasyAces/FantasyDraft: 3 percent and 5 percent

I swear I’m trying to write up good options this week…Alex Smith, much like with Flacco, is not a guy I enjoy writing up. The Chiefs offense is extremely frustrating to figure out, but for $5400 he has to be in play here. The Titans pass defense is among the worst in the league. On AVERAGE they are allowing nearly 300 passing yards per game and have allowed 3800 yards on the season already. It’s pretty pathetic. Smith doesn’t provide the upside of some other players but he’s always a safe bet to take care of the ball and I think the Chiefs will have control of this game. The Titans cannot stop short passes, Smith’s forte, so that even makes me want Smith more. The best thing you can do is pair him with one or two pass catchers I hope that’s how they reach their 23.75 implied total.

Ownership from Thursday Lock Contests on FantasyAces/FantasyDraft: 5 percent and 1 percent 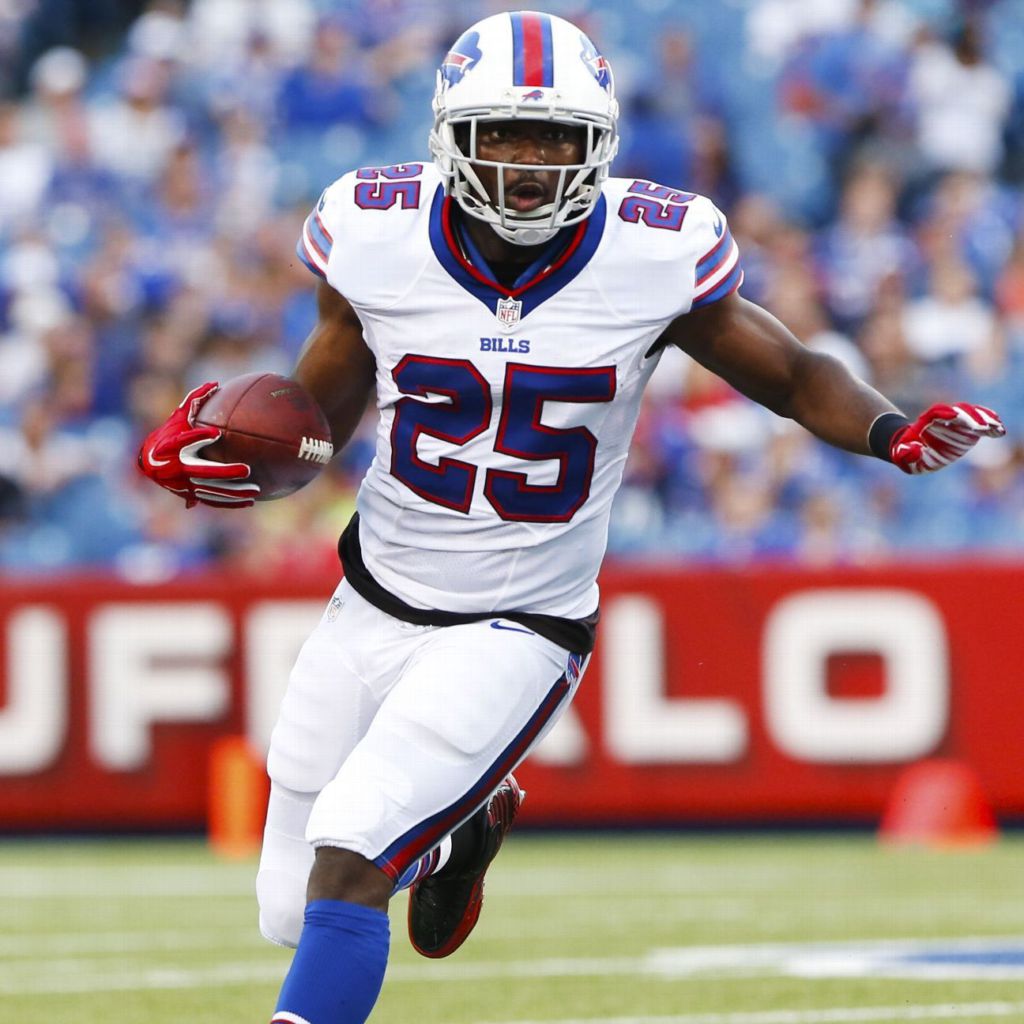 McCoy is in one of my favorite spots of the week. The problem is his price…he’s the third highest priced RB on the slate and even though he should see a majority of the workload there’s always Mike Gillislee there to remind us he still exists. Browns rank last in rush defense allowing 146 yards per game to opposing running backs so it makes sense to put McCoy in your lineup. I just wish I knew what his ownership is going to be. If you told me he was 25-30 percent owned in tournaments, I might be lower than the field on him. Still, the fact remains this match-up is too juicy to fully fade. I would encourage you to build high usage, high-upside guys around McCoy in lineups you’re deploying him.

Ownership from Thursday Lock Contests on FantasyAces/FantasyDraft: 33 percent and 32 percent

Hello, again, Mr. Freeman. I’ll admit it, I was a week too early. I should have looked ahead to this week and saved him, but oh well. Here we are…again. Read what I wrote in last week’s article and just consider that this week instead of the Rams, Freeman gets the 49ers. This is a dream match-up and I guarantee you whatever his ownership is will be too low. Don’t be worried about the timeshare with Tevin Coleman. It’s been there all year and we’ve seen Freeman put up big numbers. One thing to keep in mind here is that six of Freeman’s seven have come at home. Matt Ryan has been throwing the ball less and less each week and I have a feeling they’ll let the running game do the work on Sunday.

Ownership from Thursday Lock Contests on FantasyAces/FantasyDraft: 15 percent and 14 percent

I love Le’Veon Bell, but this game versus Cincinnati has Antonio Brown’s name written all over it. It’s crystal clear how people are going to approach this game…load up on Lev Bell because he dropped 50 DK points on Buffalo’s defense and don’t play Big Ben in road games. This is a rivalry game, though. Whatever you think is supposed to happen, usually, doesn’t happen that way. I’m hoping to get Antonio Brown criminally under-owned this week. Earlier this year when the two teams met he saw 11 targets but only caught four of them for 39 yards. It was only the second game this season where AB saw over ten targets and didn’t score double-digit DK points. The other game was last week when Bell took over the game. Bell missed that week 2 match-up versus the Bengals and Bell being in the lineup frees up space for Brown to eat against opposing defenses. In five career games in Cincy, he hasn’t scored a touchdown but has caught at least six passes for an average of 80 yards.

Ownership from Thursday Lock Contests on FantasyAces/FantasyDraft: 3 percent and 7 percent

As mentioned above with Alex Smith, the Titans defense is putrid. And by putrid, I mean very, very bad. They’re allowing the most fantasy points to the wide receiver position. As long as they’re on the slate I’m going to target them. Hill has blown up in popularity over the last month with the big three touchdown game versus Denver and becoming one of Alex Smith’s most reliable targets with an 89 percent catch rate over the last four weeks. The best part about rostering Hill is that he’s involved in the return game so you can receive extra points there. Keep the Chiefs defense in mind if you’re going to roster Hill for that very reason.

Ownership from Thursday Lock Contests on FantasyAces/FantasyDraft: 11 percent and 15 percent

Lucky for us, the Draftkings prices were released before former Arizona Cardinals receiver Michael Floyd. Floyd is now a New England Patriot and J.J. Nelson should be one of the best value plays on the board. If you’re planning on playing Bell and DJ this week at running back you’ll need a cheap wide receiver like this that offers great upside. There is little competition for Nelson on the team for the No. 2 spot as they only have Brittan Golden and Marquis Bundy to challenge him. Nelson has only seen four targets in his past two games but scored double-digit DK points in both. We’ve seen the Saints defense give up big plays in the passing game all year and Nelson should be in line to make another happen on versus them on Sunday.

Ownership from Thursday Lock Contests on FantasyAces/FantasyDraft: 11 percent and 5 percent

He’s playing in a dynamic offense and is $400 above the minimum. Robinson might not be glamorous with Mohamed Sanu set to return, but you cannot ignore this spot. Julio Jones will miss his second straight game and Sanu missed for a groin injury so he could be limited. To get guys you love this week in your lineup you need sub-4K guys like Robinson who saw six targets last week and caught a touchdown the week prior.

Ownership from Thursday Lock Contests on FantasyAces/FantasyDraft: 1 percent and n/a

Play your tight ends versus the Lions. They’ve allowed eight touchdowns and 15 points on average to the Tight End position. He’s $2700. Don’t look at the game logs in this match-up. Just know Tye will reach value, Tight End is ugly this week, and move on.

Ownership from Thursday Lock Contests on FantasyAces/FantasyDraft: 1 percent and n/a

My Main Draftkings Lineup for Sunday:

Senior writer, editor, and contributor of TFA since 2016. Co-founder and co-host of the DFS DegeNation Podcast. Ryan is a current resident of Chicago, IL and roots for all of their sports teams. Although, he's somehow a Steelers fan... A sometimes guest host of the TFA Podcast, he also writes redraft content for the site. His main focus for us is daily fantasy content for both Draftkings and Fanduel. You can follow Ryan on Twitter @RyanAlexander_W.