We’re in the thick of the fantasy season and there’s no time to waste!  The Rookie Review Datasheet is up to date and I’ll be breaking down the rookies’ performance from the previous week with the 2018 Week 5 Rookie Review.  Let’s get to it.

Nyheim Hines was typically being drafted in the mid to late second round of rookie drafts, sometimes falling to the third.  No matter where you drafted him, you have to be happy with his production thus far.  Hines led the rookie running backs in opportunities with 24 (15 carries, 9 targets) in week five.  This produced 90 yards from scrimmage and a mid-RB2 performance.  Even though the Colts are going to continue to use a committee approach, Hines role is safe as he leads the running backs in both snaps and opportunity.  Hines is a safe target for any dynasty team’s situation as a weekly flex option.

Whether you’re #TeamFreeman or #TeamLindsay, we can all agree that Devontae Booker shouldn’t be seeing 30% of the weekly snaps.  Hopefully as the season progresses Booker will be phased out in favor of something closer to a 50/50 split between Royce Freeman and Phillip Lindsay.  Lindsay is still leading the Bronco backfield with 69 opportunities (57 rush, 12 targets) and 393 yards from scrimmage to Freeman’s 55 (49 rush, 6 targets) opportunity and 271 scrimmage yards.

Although Ito Smith didn’t light up the box score, it’s telling that he was still involved with Devonta Freeman returning from injury and Tevin Coleman healthy.  If he gets dropped or you have the opportunity to acquire Smith on the cheap, stash him and reap the rewards next season.

There’s an NFL team in 2018 that drafted a running back in the first round and proceeded to play fourth and seventh round players over him.  His name is Rashaad Penny.  I thought Penny would have issues running behind the Seahawks offensive line, as he had trouble creating yards for himself if met with backfield penetration, but I didn’t see this coming.  Penny saw ONE SNAP against the Rams – and that was on special teams.  Yikers. 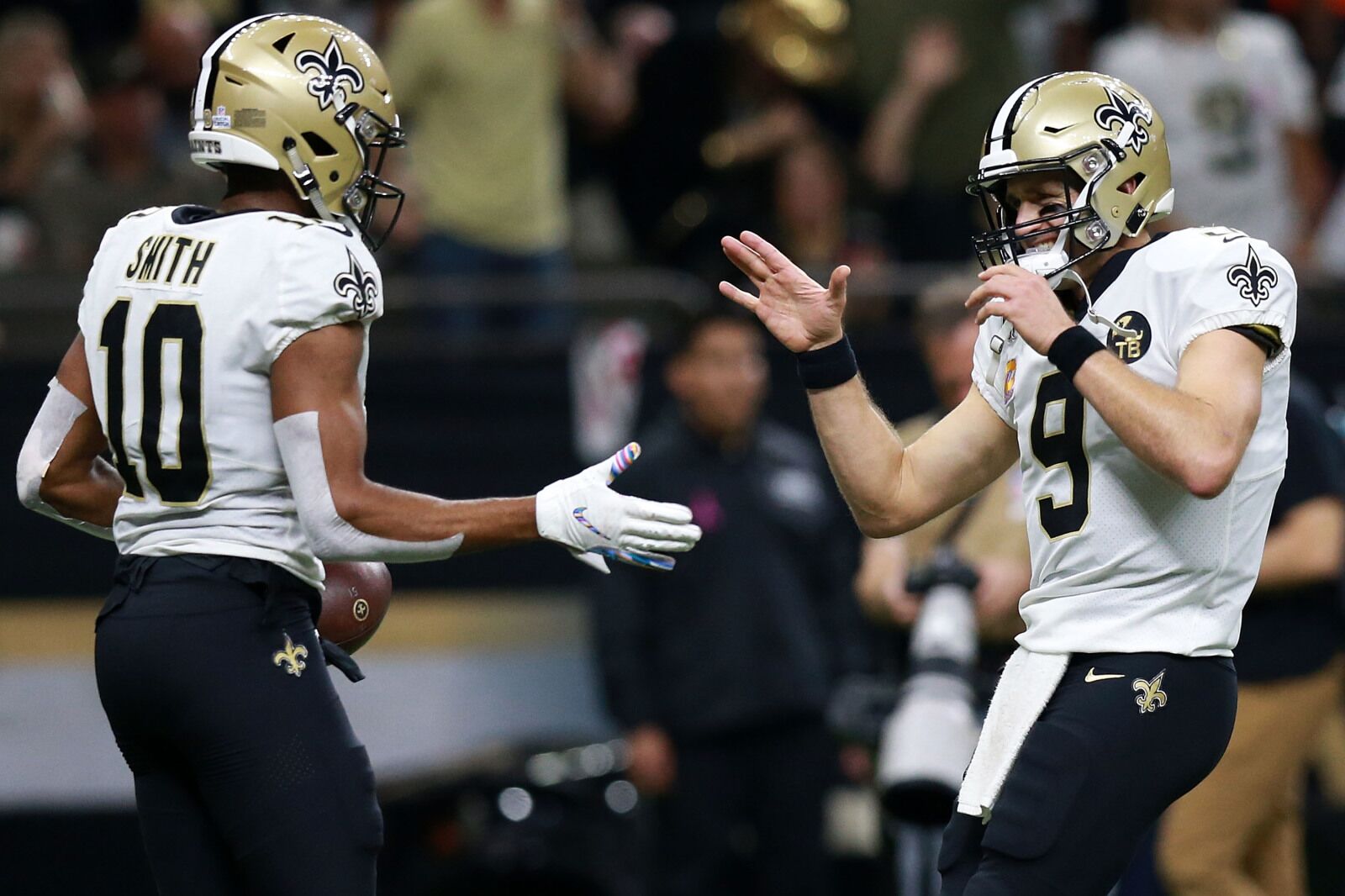 Just as a general aside: it was awesome to watch Drew Brees make history Monday night.  He’s such an easy guy to root for, and outside of fantasy circles, seems to be generally underrated somehow.  Tying this together with the 2018 Week 5 Rookie Review, UCF product Tre’Quan Smith pushed Brees past Peyton Manning with a 62-yard TD catch.  Filling in for Ted Ginn, Smith’s role remains to be seen once Ginn returns to the lineup.  Something tells me Brees might be happy to see Smith on the field the rest of the year.

Two of the three wide receivers Green Bay selected in the 2018 draft made contributions last Sunday against Detroit.  Marquez Valdes-Scantling and Equanimeous St. Brown combined for 15 targets, turning that into 10 catches for 157 yards and one touchdown, scored by MVS.  Both of the receivers they stepped in for, Randall Cobb and Geronimo Allison, may not be returning for week six.  This will give us confidence in rolling with the rookies if that’s the case.  EQSB is still probably held in higher regard just due to name recognition even though MVS was clearly the second receiver option.  Try making a move for Valdes-Scantling if possible.

After seeing 5 targets and 127 air yards during his first game in week two, James Washington has seen a total of 8 targets and 110 air yards the past three games combined.  To be fair, Pittsburgh’s offense has fallen short of expectations, so this could open a discounted buying opportunity.

He was probably on your bench, but Christian Kirk had his second solid outing in his past three games.  Kirk posted a 3-85-1 line, accounting for 30% of Josh Rosen’s completions and 50% of his passing yards.  I wouldn’t feel comfortable starting him given their struggles, but I definitely feel better with Rosen under center rather than Samuel L. Bradford.

Ian Thomas had his best game of the season, snagging three balls for 38 yards.  That would normally be good news, but Greg Olsen is eyeing a return.  I don’t foresee this going well for Olsen, so it might not be the worst thing to just stash Thomas.

Hayden Hurst made his NFL debut in week five and joined a muddy tight end group.  This past week, Nick Boyle led the way with 45% of the snaps, followed by Mark Andrews at 38%, Maxx Williams at 31%, and Hurst seeing just 24%.  Baltimore’s first, first-round pick was being eased into action.  With that in mind, it’ll be interesting to see who the odd-man-out is.

The 2018 Week 5 Rookie Review is in the books!  The Rookie Review Datasheet will give us a good overall picture of the 2018 rookie’s outlook, so be sure to refer to it throughout the week.  If you’re somehow not familiar with Pro Football Reference, Football Outsiders, or Josh Hermsmeyer’s Air Yards, do yourself a favor and play around with the sites.  Make sure you’re keeping an eye on TFA’s Twitter account so you aren’t missing any of the articles coming your way on a daily basis.  Good luck in week six!