I feel like I say this every year, but this NFL season is flying by.  We’ve already reached double-digit weeks, and only have a few weeks until the fantasy playoffs begin.  With no time to waste, let’s jump into the Week 10 Rookie Review! 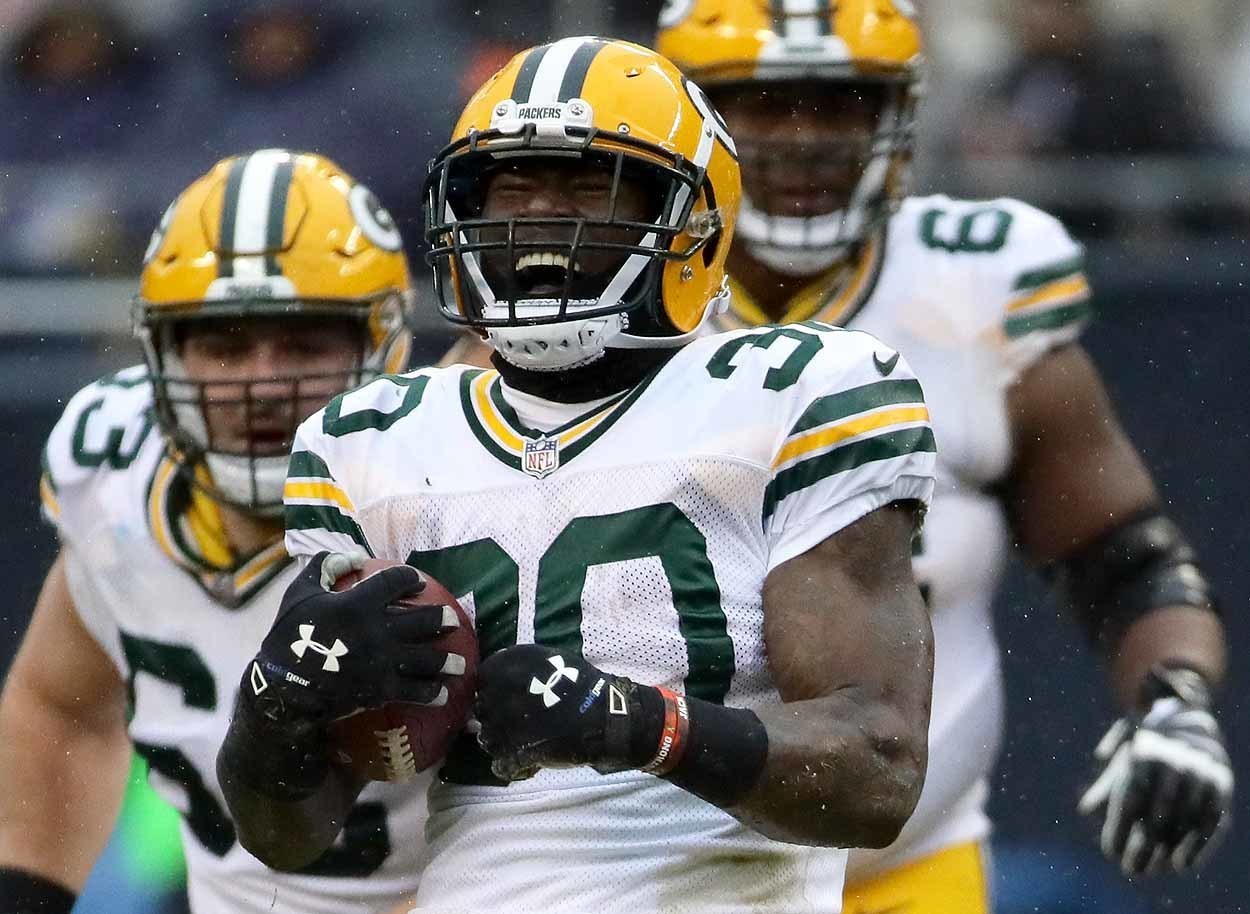 Williams Truthers…UNITE!  Jamaal may be the only show in town for week eleven due to injuries.  Fellow rookie Aaron Jones will miss several weeks, and TyMo aggravated his rib injury.  Against the Bears, Jamaal wasn’t flashy but was effective behind an injured offensive line.  If he’s on your waivers he’s worth a pickup, but I wouldn’t be spending major capital to get him.

This game was a bit of a head-scratcher.  LF was basically unseen during the fourth quarter, only receiving one touch.  When OT started, however, he was back out there.  After not playing since week six, Fournette owners were hoping for more.  Hopefully, this was just a case of “being rusty” and/or the Chargers defensive scheme.  Week eleven won’t be any easier, as the Jags will face off against Football Outsider’s second-ranked rush defense in Cleveland.

The dude just keeps producing.  At this point, he’s an every week plug-and-play.  He’s third in catches and fifth in reception yards amongst RBs, and is no slouch rushing either, ranking in the top 25.  The Saints easily have the best running back tandem in the NFL.

Ekeler provided a spark to an offense that didn’t have much going for it.  In fact, the undrafted rookie from Western State led the Chargers in both receiving and rushing yards.  He’ll be a boom/bust play for your fantasy teams but needs to be owned.

Thanks for ruining my Bilal Powell week, Elijah.  While myself and others assumed Powell would lead the backfield by a decent margin, McGuire out-snapped (36-33), out-touched (12-11), and out-produced (58-36) Powell.  I would be lying to you if I said I had any idea how this would shake out in the weeks ahead.  Hopefully, you have better options with bye weeks coming to an end.

With Rob Kelley hitting injured reserve, Perine is going to get his chance to show what he’s got these last few weeks.  Although I’m not a fan, I can admit he did look his best this past week against a worthy adversary in the Vikings.  I’d be using this as a selling opportunity, but I’ve been a hater since the offseason.

Breida’s touchdown came with under ten minutes left in the fourth quarter to secure the 49ers first win.  This backfield is still Carlos Hyde’s, but Breida is a must-own handcuff.

Two weeks in a row Mixon hasn’t cracked 50 total yards, and two weeks in a row his fantasy day was saved by a touchdown.  With Jeremy Hill placed on IR, Mixon will continue to see the bulk of carries, but he’s still splitting time with Giovanni Bernard.  At this point, I’m not sure we’re going to see the Mixon “breakout” game we’ve all been waiting for.  The Bengals are set to face several stingy defenses in the coming weeks, starting with Denver this Sunday.

What do you do if your team is running at will against their opponent?  The Saints’ answer is to put in and an undrafted rookie I’ve never heard of, apparently.  Edmunds spent his first three collegiate years at Virginia Tech and his last at Maryland.  His best year was as a freshman, although none were eye-popping.  With Daniel Lasco’s season over, Edmunds slides in as their third running back.

Unless Mack hits a big play, this is the floor that fantasy owners are going to have to live with.

On a night where everything was working for the Panthers, CMC did his damage by finding pay dirt twice.  McCaffrey is no doubt going to be more involved going forward, as they, unfortunately, won’t be playing the Dolphins for the remainder of the season.

With Tom Savage running the offense, Foreman will be useless unless Lamar Miller goes down.  Even then, the Texans won’t have the type of game script to favor someone like the rookie from Texas.

The Packers seem to have caught the injury bug in a big way.  The UTEP product is slated to miss 3-6 weeks after suffering an MCL injury against the Bears.  For now, Jamaal Williams will reclaim the backup spot.

Even with Gallman having a few solid runs, he took a backseat as game script forced Shane Vereen into a bigger-than-normal role.  With the team seemingly favoring Gallman, and the talent coming in the 2018 draft, I’m not sure what the future holds for the Clemson Tiger.

The “Human Joystick” has been rendered useless by the bright offensive mind that is John Fox.  I say it every week, but it’s frustrating to watch teams like the Bears completely misuse their explosive playmakers.

With the Rams offense rolling the way it is, there’s no reason to believe Kupp will be more involved going forward.  He provides owners with a safe floor, but unless he scores a touchdown he’ll hover around the 8-12 point mark in full PPR leagues.

The second-round pick from USC continues to impress.  JuJu was tied with Antonio Brown in targets (7) but doubled AB’s yards.  With all of the hype that has surrounded him recently, it’s hard to believe that he only has 29 catches for 521 yards to this point.

Unless you were off the grid last week, you realized Mike Evans was suspended and that Godwin was getting his first NFL start.  The Penn State product had a solid outing, but with Evans returning this week, this performance won’t vault him up the depth chart.

When it rains, it pours.  Samuel was having himself a nice night and almost had a touchdown to go along with it.  Unfortunately, he dropped that pass and ended up being injured on the play.  He’s now headed for surgery and the IR to repair ligament damage in his ankle.

Another almost, would-be touchdown last weeks Rookie Review.  Davis had what seemed to be a 20-yard touchdown, but fumbled out of bounds for a touchback.  Even with the missed touchdown, the fifth overall pick could have had a bigger day had he caught a handful of targets that he got a hand on.  In three full games, Davis has had 10, 5, and 10 targets.  There’s still time to buy him before he has a huge game.

Cole may be in for a bigger role with Allen Hurns inactive this week against the Browns.  Fellow rookie Dede Westbrook should be making his NFL debut, however, so that may dampen things.

The Eastern Washington rookie was third in wide receiver snaps, behind only Marquise Goodwin and Aldrick Robinson.  With the 49ers ravaged by injuries, Bourne could continue seeing increased opportunities.

The WKU Hilltopper is only a dynasty stash at this point.  The silver lining to this is that Taylor was one of only four wideouts to receive offensive snaps last Sunday.

Week 10 represented Hansen’s highest snap count by a wide margin.  Other than last week where he logged 32 snaps, the most playing time he saw was week one with 12 snaps.  With Kerley out until week fifteen, Hansen seems to be slotting in as the Jets third receiver.

Welcome back to the rookie review, Kenny!  After killing the preseason, as well as week one of the regular season, we haven’t seen the explosive rookie since week three.  Golladay saw three targets on eleven snaps in his first game back from the hamstring injury.  As long as he doesn’t suffer any setbacks, I’ll be expecting his snap count to increase going forward.

The catches and yards both marked career highs for Williams to this point.  He hasn’t made the impact some were hoping for, but with all of the options for the Chargers, I don’t see him doing much more the rest of the season.

All of Stewart’s yards came on a rush, as his only target and catch went for a donut.  Maybe Stewart could have a bigger role and impact if the Jets installed a different offense, but until then Stewart can be left on your waivers.

Since A.J. Green didn’t bodyslam anyone this week, Malone’s snap share dropped back down.  The Bengals offense has struggled outside of Green, and other than Mixon none of their options are seeing consistent touches.  Malone is a stash.

It seems as though Seattle is finally giving up on trying to have a run game and just letting Russel Wilson take control.  This will give Darboh more opportunities to get on the field, but he’ll be their fifth option at best.

Engram took a back seat to Sterling Shepard in this game but is still clearly option 1-A/1-B for the Giants.  You’re starting him every week.

Although Shaheen’s snaps have generally been increasing the past several weeks, this is only the third game he’s seen a target.  With Zach Miller out for the season and the Bears hodgepodge of WRs, Shaheen could see more looks going forward.

Jonnu has been seeing the field pretty often for a rookie behind an entrenched veteran.  Although this is good news going forward, it isn’t translating into fantasy points (yet).  The FIU rookie is my favorite tight end stash.

Week ten marked the first time since week four that Njoku played more than 50% of the offensive snaps.  Hopefully, the Browns have realized their offense needs to have one of their most athletic weapons on the field more often.  Probably not, but we can dream, right?

Thanks as always for checking in and reading the Week 10 Rookie Review.  Trade deadlines are quickly approaching so use this information along with our other great articles to make your end-of-season push.  Also, if you haven’t played around with Pro Football Reference’s Play Index, you’re missing out!