Another NFL week has gone by, so it’s time to break down how the 2017 rookies performed the prior week.  There are turkey leftovers to get to, so let’s jump right into the Week 11 Rookie Review!

After a shaky week ten, the rookie out of LSU looked like the early season version.  Fournette became the first RB all year to rush for over 100 yards against Cleveland’s stout run defense.  After the game, he admitted that his ankle injury will linger all year, but that it won’t keep him off the field.  You aren’t going to sit LF, but it does give owners an uneasy feeling.

Perine easily had his best game against New Orleans, gaining chunk yardage and actually making some moves that weren’t directly into his linemen’s back.  I’m still not a believer so I would be using this as an opportunity to sell any shares that you may have.  If you’re a contender, I’d think about packaging Perine with a pick or another mid-tier player and upgrade your roster.  If you’re not contending, I’d be looking at my leaguemates’ rosters to see who is desperate for running back help.

What a mess of an offense.  The silver lining here is that Williams should be seeing bulk volume with TyMo nursing a rib injury, and Aaron Jones hurt and dealing with legal issues.  Let him be someone else’s headache.

Mixon and the Bengals had been struggling to run the ball all year, and facing the Broncos is not the answer.  The good news is that Mixon still clearly has the hold on the offense, seeing 22 touches to Gio’s 4.  Cincinnati’s offensive line is going to cap his rushing upside until it is upgraded.

After looking like a Rookie of the Year front-runner the first three weeks of the season, Hunt has now gone three straight games without surpassing 100 scrimmage yards.  From what I’ve seen he’s still running the same but the long plays haven’t been there.  I’d still be buying him, and now would be an opportune time to do so.

Every time Kamara hits the field, he reminds me that I was too low on him.  This Saints backfield has been so good that people are debating if Drew Brees is done (hint, he’s not).  If you didn’t buy Kamara prior to this insane stretch, you aren’t getting him without backing up the proverbial dump truck.

Two straight weeks we’ve had rookies go down with injuries in the midst of good games.  Last week it was Curtis Samuel, this week it was Foreman.  The Longhorn alum was having his best game in several weeks, scored the game-clinching touchdown, and tore his Achilles while doing so.  Throw him on your IR and hope for the best next year.

Finally!  Week eleven marked the first time since week three that Cohen has had over 40% of the snaps, and the first time since week six with over double-digit touches.  Unfortunately, this is the Bears we’re talking about so I wouldn’t be putting him in lineups.  I don’t think it would surprise anyone if he dropped back down to 25% snap share and a handful of touches.

The UDFA sensation continues to make the most of his opportunities.  With the number of points, the Chargers put up, however, this line is almost a bit of a letdown.  If you have Gordon, you need to grab Ekeler, as he’s clearly the only backup worth rostering.

Orleans Darkwa is dealing with a hamstring injury, so if you went #ZeroRB you might be able to throw him in your lineups this week.  Gallman would see a spike in usage if Darkwa were to miss any time.

Clement is making the most of his touches in a crowded backfield.  After their week ten bye, Blount was on the field for 30 snaps, Clement 19, Ajayi 13, and Barner 2.  For Clement, this meant a decrease in nine snaps and seven touches.  It sounds cliche, but the phrase “the Eagles didn’t give up a fourth-round pick to not play Ajayi” holds true.  Even if Ajayi doesn’t become the lead workhorse back, he’s still going to siphon snaps and touches away from everybody else.  You have to hold Clement, but it would be difficult to start him.

You can go back to week two, highlight, copy and paste my analysis here.  It would say “handcuff only”.

Welp, that’s one way to keep yourself off the field.  Mays had an opportunity to work himself into a split backfield due to the situation mentioned with Jamaal Williams above.  If you added Mays because you’re in a deep league, you can use that roster space for someone else.

Dayes might be an interesting stash if the Browns didn’t have five draft picks in the first two rounds in 2018.  Even if they let Crowell walk, I can’t imagine a scenario where Dayes will be holding any sort of value.

Kupp should have had a bigger day had it not been for a fumble on the one-yard line and a would-be 30-yard catch that went through his hands.  With Robert Woods out for a couple weeks, Kupp may see a few more targets each game, but his ceiling is still limited.

These stats for Williams in the Week 11 Rookie Review are all season highs.  He also saw a season-high eight targets, not surpassing two in any previous week.  Another positive indicator was that Williams was third in receiver snaps, topping Travis Benjamin for the first time.  If this continues, fantasy owners may be able to look at him as a potential lineup possibility.

After looking like a complete bust the first several weeks, Zay has started to turn his season around.  After posting an abysmal 27% catch rate his first seven games, Jones has caught 71% of his 14 targets the past two contests.  You’re still not starting him, but it’s a much-welcomed change.

With Antonio Brown absolutely going off Thursday night, there wasn’t much production left for JuJu.  Whenever you’re sharing the field with arguably the best receiver in football, there will be stat lines like this one.  Keep starting him.

In his first regular-season action Westbrook saw six targets, behind only Marqise Lee and tied with Keelan Cole.  On a run-first offense and Bortles at quarterback, the Oklahoma speedster can’t be trusted just yet.

The undrafted free agent from Florida State has only seen the field whenever Shepard has been inactive.  Unless you play in a super deep league format, he can be left on waivers.

Davis is seeing the snaps and targets needed to produce, but it hasn’t come to fruition just yet.  His remaining schedule is favorable, so I wouldn’t be surprised to see better production.

The same thing I said above for Dede holds true here for Keelan Cole as well.  Cole hasn’t had more than three receptions in a game and has topped 50 yards just twice.  Don’t forget that Allen Hurns has also been inactive with an injury.  If you’re rostering Cole, you can’t start him.

That massive drop in snap percentage is called the “Mike Evans Effect”.  As I said last week, Godwin’s solid performance wouldn’t be enough to keep him on the field, even as a third receiver.

With the Cowboys offense struggling without Zeke, Dez Bryant can barely be trusted, let alone Noah Brown.  He’s safe to be left on waivers.

Hollins won’t be a trusted fantasy starter this year, but depending on off-season moves, could end up as their number two or three receivers next year.  Stash the 6’4″, 220-pound rookie. 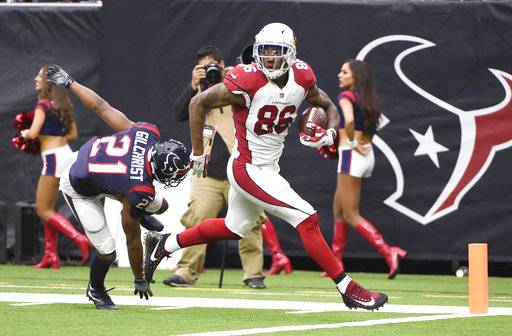 The second round pick from Ashland University continues to see his opportunities increase.  John Fox and the Bears have been letting Mitchell Trubisky throw more than four times per game, so Shaheen may hold some fantasy value if this trend keeps up.

RSJ saw five targets on eight snaps this game.  This also brought his snap total on the year to a massive nine.  Don’t go crazy adding him from waivers.  If you have the bench space, he does have some intriguing traits.  If you do add him, please don’t start him next week.

Howard has quietly out-snapped fellow tight end Cameron Brate over the past three weeks.  This is the first week that it has shown up on the stat sheet, however.  With the offense struggling, O.J. isn’t a trustworthy starting option, but his snaps are certainly trending in the right direction.

This has been one of the more frustrating situations to watch play out this season.  While the addition of Corey Coleman and (potentially) Josh Gordon should help Njoku see more favorable coverages, it will probably just bury him.  Hold him for next year and cross your fingers.

In what appeared to be a great matchup for fantasy, both the Giants and the Chiefs offenses couldn’t get anything going.  It was a disappointment but you’re still going to start Engram on a weekly basis.  He’s currently only behind Kelce, Gronk, Ertz, and Graham in PPR scoring.

Everett isn’t seeing consistent enough snaps to be considered in your lineups.  He’s one of Coach McVay’s “guys” so if you’re stashing him he’s probably worth holding onto, but I don’t see there being a mad dash if Everett is on waivers.

This situation is reminiscent of RSJ’s above.  Sprinkle has been targeted in just two games and has played less than 12% of Washington’s total snaps.  The only scenario I’d be rostering him is if my league had a deep taxi squad.  He could be worth a hold because only Jordan Reed and Vernon Davis are ahead of him, but I wouldn’t keep him on an active roster.

Thanks for checking out the Week 11 Rookie Review!  Let me know who you’re stashing on your rosters by leaving a comment below or hitting me up on Twitter.  As always, I have to give huge thanks to Football Outsiders and Pro Football Reference for their helpful websites.