Here we are.  The week before (most) of your fantasy playoffs begin.  Whether you’re contending or looking towards next year, see how the rookies can help you.  With no time to waste, let’s get into the Week 12 Rookie Review!

Perine amassed 100 yards on the ground for the second straight week.  After not showing much promise through the first half of the year, Samaje is looking like a different player.  Instead of running directly into the back of his linemen, he’s finding cutback lanes and making adjustments.  If you’re a contender, you’re probably riding him for the playoffs.

Joe Mixon finally gets positive game script, and Joe Mixon finally gets a workhorse load.  Although I personally didn’t think this would be the game, it was good to finally see the Bengals lean on their talented rookie.  Unless you can find an owner who doesn’t believe in Mixon going forward, you’re not plucking him from any roster.

Another “finally” performance.  This is the kind of outing #TeamJamaal believers were envisioning at the end of April.  I have no idea what this backfield is going to look like next year, but he’s a volume-driven RB2/Flex play as long as TyMo and Jones are out.

With having nowhere to run and trailing most of the game, the Jags put LF on the sideline. He was only out-snapped T.J. Yeldon by six, but for his owners, it felt like a million.  Fournette is still an every week RB play and gets the Colts for week 13.

Just when you think the game log can’t get worse for the Toledo rookie, it somehow does.  To be fair, however, KC’s offense altogether has had a massive regression.  I still believe in Hunt, so I’ll be making offers everywhere while I still can.

Yes, you read that correctly.  The electric rookie somehow managed to produce 188 yards from scrimmage on just 11 touches.  At this point, there’s nothing left to say.  If you were bummed this offseason with a late first and had to “settle” for Kamara, you’re sitting pretty.

What. A. Mess.  While the Giants are on fire, on a sinking ship, inside of a tsunami, I won’t be touching any of their offensive options.

Similar to Samaje, CMC has been looking more comfortable in the running game the past couple weeks.  That, along with his receiving floor, bodes well for the Stanford rook going forward.

Ekeler has standalone value in PPR leagues but could be a league winner if Gordon goes down.  He’s a cheap trade target for playoff teams.

The stubborn out-of-contention Jets continue to trot out Matt Forte and Bilal Powell, keeping McGuire far from fantasy lineups.  I have doubts about McGuire’s future, but at this point of the season, they should be getting him more opportunities.

Speaking of stubborn franchises (insert eye-roll emoji here).  You can’t start him, but he’s absolutely worthy of a bench spot.  If he continues with his lackluster production, he’ll be a prime buy-low candidate once your league-mates catch the rookie fever.

The Wisco rookie continues to produce with his limited touches, but there’s no reason to think they will increase this year with Ajayi and Blount ahead of him.  Clement would be an interesting “what-if-the-depth-chart-opens-up” candidate next year.  As with Mack, he’d be someone I’d keep an eye on for a cheap buying opportunity in the offseason.

The seven snaps and 10% snap share are easily a season-low for Breida.  If you’re a contender with Carlos Hyde, you still need to roster Breida for the stretch run. 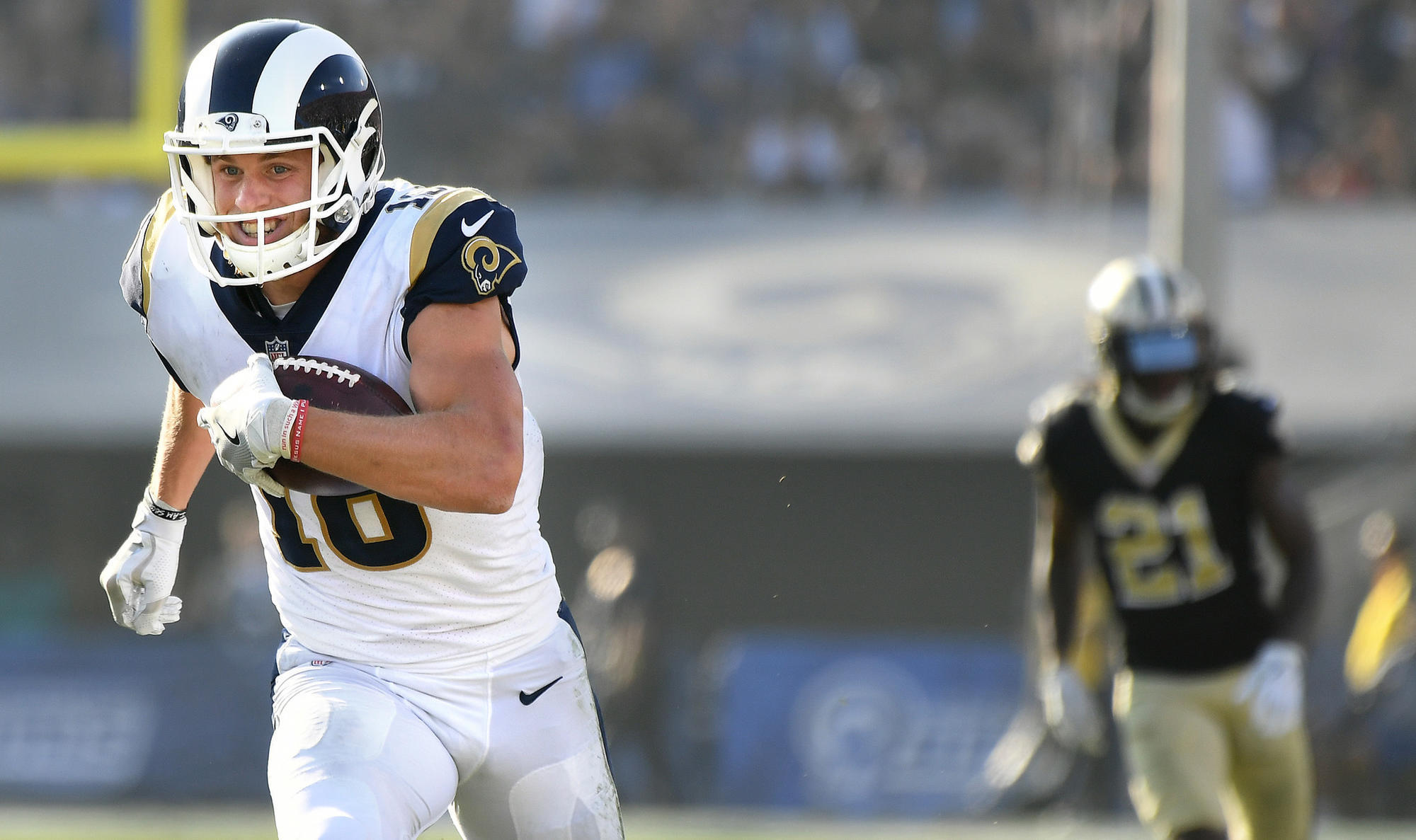 This game marked Kupp’s first 100-yard game, as well as the second game with double-digit targets.  As the Eastern Washington product continues to refine his game, he’ll be a PPR staple for your lineups for years.

In just his second game back, Westbrook led the team in targets.  It’s clear that Westbrook will be a key part of their offense, but with Bortles at the helm, that doesn’t mean much.

The “Corey Davis Breakout Week” will have to be postponed for another game.  He has a favorable schedule going forward, but until Marcus Mariota can hit some positive regression, I can’t trust him in my lineups.

In the wake of Robert Woods’ injury, Reynolds saw his first targets since week two.  He saw six targets and caught his first NFL touchdown.  With the spread-it-around nature of the Rams offense, Reynolds is a stash-only option.

Zay’s second touchdown saved his fantasy day but was close to having two more.  He was a broken tackle away from a forty-yard score and nearly had a nasty one-handed grab for another long TD.  Zay has put together three solid games in a row, and is starting to look like the prospect many were excited about.

Golladay has been providing explosive plays the past three weeks, having more than 50 receiving yards in each game.  The problem is he hasn’t seen more than four targets and has no scores.  With Marvin Jones and Golden Tate not going anywhere, Golladay will live and die by the long ball.

Returning to the field after suffering a rib injury, Taylor saw the second most snaps amongst 49er receivers.  With Garoppolo set to make his first start this week, we’ll have to wait and see how this plays out.

The jump in snaps for Cole was nothing more than negative game script.  He has yet to top 65 yards or three catches in a game this season.

As with Trent Taylor above, it’ll be interesting to see who Garoppolo targets while he’s starting games.  Unless you have an absurd amount of bench spots, Bourne can be safely left on waivers for now.

With the Eagles rolling, Hollins won’t see much production.  Mack’s upside comes from catching long touchdowns, and there won’t be any reason to use him that way when his team is up multiple scores.

The Week 12 Rookie Review marks Williams’ first game action since week three.  With injuries to their receiving corp, Coach Arians said it was time to see what the rookie has.  We’ll see what this translates into, but Williams was one of my favorite late-round rookie targets.

If you’re saying “Who?”, you aren’t the only one.  Natson was signed from the Jets practice squad two weeks ago and saw only special team snaps.  Week twelve, he saw one offensive snap, which he turned into one catch for a negative yard.  With little jumping out on his PlayerProfiler page, you can forget this name.

The Efficient One strikes again.  This week RSJ racked up his production on just seventeen snaps.  I thought week eleven was unsustainable, but he was able to do it again week twelve.  If Seals-Jones is still available in your leagues, he’s at least worth a look.

The rookie from “The U” has his yo-yo snap count continue.  As a Yinzer I never thought I would say this, but I’m excited to see what the Browns offense looks like.  With Corey Coleman and Josh Gordon, this should (in theory) open up looks for Njoku.

I haven’t seen much talk about this on the Twittersphere, but Howard is looking like he’s the number one tight end in Tampa Bay.  O.J. has out-snapped and/or out-produced Cameron Brate over the past few weeks.  Jameis Winston returning may throw a wrench in this, but Howard is obviously the dynasty asset we want.  I’d be throwing out feelers if your trade deadline is still open.

While Howard is enjoying a rise in success, Engram’s is dropping (see what I did there?).  After being one of the more reliable tight ends, Engram has struggled with drops the past two weeks.  His production has suffered because of it, and now the Giants are in complete YOLO mode.

With Tom Brady, Jr. returning to the Bay, I’m anxious to see what this means for Kittle.  Whether or not Garoppolo is their savior, the Iowa product is still worth a stash if you have the bench space.  He’s a SPARQ freak with not much around him.

The same problem that will keep Josh Reynolds down applies to Everett here as well.  There are simply too many weapons on the Rams offense for Everett to make a consistent impact.  He’s safe left on waivers until the depth chart clears out.

One of the knocks against Shaheen coming out of Ashland was his blocking.  The fact the Bears were trailing the entire game and Shaheen’s snaps dropped is head scratching.  But hey, it’s the Bears.

The Week 12 Rookie Review is a wrap!  I always have to give Pro Football Reference and Football Outsiders a shout out for making this article possible.  This is an important point of the dynasty season.  Even if you’re not contending, you need to be using this information to add upside rookies to your roster for next year.  Let me know who you guys are stashing by dropping a comment or find me on Twitter.