Week 3 has come and gone, and it’s time to look back to see how our beloved rookies performed with their opportunities.  Let’s get to the week 3 rookie review!

Three weeks into the 2017 season and Dalvin Cook is looking like the total package.  He’s running inside and outside, splitting out-wide on pass plays, and even took a Wildcat snap.  Dalvin is dominating the RB snaps and production and was rewarded with his first TD of the season.  In the week 3 beat-down of the Bucs, Cook accounted for over 77% of the team’s rushing yards as well as 19.5% of their passing yards.  If it sounds like I’m gushing over him, it’s because I am.

FINALLY!  The moment Mixon owners have been waiting for finally arrived in week three where Mixon out-snapped Jeremy Hill and Gio Bernard.  The talented rookie from Oklahoma saw 34 snaps while his counterparts saw 27 total.  Even better, Gio and Hill combined for 68 yards on their touches to Mixon’s 101.  Hopefully, this is a sign of things to come, and it may be your last chance to buy Mixon at a discount.

LF’s snap percentage was down from week 2, but he actually only played 3 fewer snaps.  Also, the Jags were dominating Baltimore just like everybody saw coming (right?), which gave Corey Grant more playing time.  Fournette is now averaging over 21 touches per game, and for someone who “couldn’t catch” coming out of college, he’s getting between 2-3 catches for about 20 yards.  It may not seem like much, but in a full PPR he’s giving you a 5 point floor each week.

Yuck.  Perine continued to do what I saw from him in college.  He runs directly to where the run is designed to go, regardless of whether there’s actually a hole to run through or not.  If there happens to be a hole there, he can get some chunk yardage, but gaining 2 yards or fewer on nearly 58% of his runs says it all.  I hate to give up on guys so early, but I’m out on Samaje.

This is the opposite of yuck.  Kareem turned in another impressive outing in week three, rewarding those who took him in rookie drafts or made early trades for him.  Something to watch for is he has actually been bottled up (comparatively speaking) in the first half of the past two games, relying on big second half plays for his fantasy production.  You’re not sitting him, but if he has a few down games don’t be surprised.

While the snap percentage doesn’t look good, the “Human Joystick” actually had his most touches in week three. The Bears run game was able to gash the Steelers’ defense (loosely using that term here), so they were feeding Jordan Howard as well. It seems like the Bears are insistent on getting Tarik mid-teens touches, so you can continue confidently rolling him out in your lineups.

Another breakout fantasy owners have been waiting for, “Sister” Christian (sorry not sorry) tallied 101 yards on 9 of 11 targets, adding 16 rush yards on 4 carries. This is what those that have been excited about the Stanford product have envisioned him doing on the field.  Seeing as Cam Newton is having trouble completing anything, this bodes well for CMC going forward, especially with the Patriots up next.

Carson saw nine fewer snaps this week, but I think that had more to do with the game-script than anything, as C.J. Prosise saw the most action he’s seen yet this year.  The Seattle rookie scored his first touchdown on a 10-yard pass.  I still think Carson is their main back, as Prosise was the only other running back with carries (4).

When I first saw this line from Foreman, I assumed he had a couple big gains on the ground to give him his yards.  Then I watched the NFL Game Pass cut, and couldn’t believe my eyes.  Foreman actually only had 25 rush yards on 8 carries while racking up 65 yards on 2 catches.  Yes, the last catch came on a Watson-shoulda-been-sacked-three-times scramble play, but it was encouraging nonetheless to see Foreman involved in the passing game.

If it weren’t for the season-ending injury to Darren Sproles, there wouldn’t be anything to see here.  However, Sproles is now out of the picture and Clement will more than likely see a decent uptick in snaps.  It’ll be interesting to see how the Eagles split the backfield touches in week four.

Continuing the injury trend, McGuire should be in line for more touches with Matt Forte presumably missing week four.  I’d like to see him involved in the passing game, seeing as he posted a 93rd percentile college target share at UL-Lafayette, according to PlayerProfiler.com

Breida is a guy you should have if you’re a Hyde owner.  We saw what people love and hate from Hyde in Thursday night’s game, totaling 94 yards and 2 scores, all while missing snaps due to injury.  Breida split time with Raheem Mostert, but saw twice as many snaps, including four targets to Mostert’s zero.

Outside of Kamara’s 4th quarter 25-yard rushing touchdown, the UT rookie didn’t have much to write home about.  The Saints are splitting him out-wide and trying to get him into space, so they absolutely have touches for him in mind, but I wouldn’t feel confident putting Kamara in my fantasy lineups.  He’s a hold if you have him anywhere.

Word on the street was that TyMo was going to be seeing fewer snaps this week.  So much for that.  Williams actually saw 6 fewer snaps than he did in week two.  Jamaal can be ignored unless Montgomery gets injured. 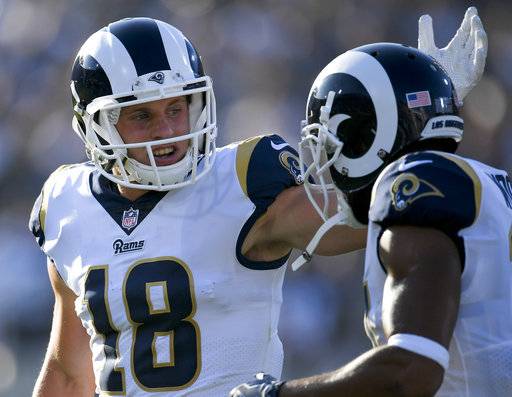 If this game wasn’t ugly enough, 86% of Samuel’s yards came on one play, a 31-yard rush.  With Kelvin Benjamin possibly missing time and the offense looking abysmal in general, the Panthers will need to get Samuel more involved.

Taylor put together a nice game on his limited touches.  He could have added another 10-yard reception but was called for offensive pass interference.  I never understood why the 2016 NCAA receiving yards leader and runner in up catches didn’t get more pre-draft buzz.  On a team that figures to see more negative than positive game scripts, Taylor is a player to stash.

It was disappointing to see Godwin’s snaps drop from 29 in week 2 to 11 in week 3, but the Penn Stater made the most of it by catching all three targets for 44 yards.  To throw an even damper towel on him, he saw 28 fewer snaps than Adam Humphries.  Godwin owners are going to have to sit on him for at least one season, but he’s had the steady drumbeat fantasy owners look for dating back to the offseason.

Taywan benefited from fellow-rookie Corey Davis missing the game, but was still a distant third in the pecking order, seeing 35-fewer snaps than Eric Decker.

JuJu saw 6 targets in this typical Steelers letdown game, nabbing just two of them.  He could have had a much bigger game if Ben had better placement on a couple balls, including a would-be touchdown.  The biggest surprise here is that JuJu saw 80% of the offensive snaps, 51, which was 6 more than Martavis Bryant.  I’m not expecting that to hold throughout the season, but a promising sign regardless.

Everyone’s preseason and week one sweetheart, Golladay has cooled off in fantasy owners’ hearts the past two weeks.  The good news, however, is that Kenny G was third in WR snaps and saw 30 more snaps than T.J. Jones.  He also saw 5 targets to T.J.’s 3, though Jones had 38 more yards.  It’s the up and downs of being a rookie.  Don’t sell unless it’s an overpay.

Another rookie that has let owners down after week one, Kupp saw just 2 targets in week three.  While ex-Buffalo teammates Watkins and Woods had better week three outings, that should open the field up for Kupp going forward.  Jared Manning, I mean, Tom Goff, er, Jared Goff, has looked completely different from his rookie season, which obviously bodes well for Kupp.  Hold or buy.

There’s not much reliability in Mr. Bortles week-to-week, let alone the teams WR3.  Nothing to see here, move along.

Much like Keelan Cole, there isn’t much to see here.  The snap percentages are misleading, as Noah only saw 3 more snaps from week two to week three.  I liked what I saw from Brown at Ohio State, but unless the depth chart completely opens up, he’s safe on your waiver wire or as a taxi squad player.

Meh.  I loved Williams as my late-round WR to grab in rookie drafts, but he’s buried behind Fitz, Nelson, and the Browns.

It is definitely concerning that on this dumpster-fire, talent-lacking team that ArDarius is only seeing 5 snaps, but I would expect that to change as the losses continue piling up.  Imagine going from Alabama to the Jets.  Poor guy.

I saved the most disappointing for last.  Zay is seeing the most snaps of any rookie WR by far, and it simply hasn’t translated.  The sure-handed receiver we saw tear it up at ECU has had several drops just three weeks into the season.  This may be a good time to buy low, but at this rate you can get him for pennies in just a couple more weeks.

After the draft, the Giants said they planned on using Engram as a traditional TE, lining up alongside a tackle and spending time blocking.  They gave up on that pretty quickly.  Engram still lines up in-line, but typically he’s running routes from there.  Three weeks into the season, Engram seems to be the safest rookie tight end.

This is another situation that doesn’t make sense to me.  The Browns were trailing by multiple touchdowns for the majority of the game, and one of their most explosive playmakers only saw 4 targets.  Browns gonna Brown.  On the bright side, Njoku has now scored touchdowns in back-to-back weeks.

Another week, another touchdown for the Titans rookie tight end.  Jonnu also saw an endzone target from 30 yards out which was just out of his reach.  This guy is going to blow up once Delanie moves on.

Howard has out-snapped Cameron Brate in both of their games, but it hasn’t yet translated to fantasy success.  Owners are going to have to be patient here.

The percentages here look alarming, but Kittle still lead the 49ers TEs in snaps week three.  Kittle had a redzone target that went through his hands that could have made his production look at least a little better.

He caught a ball so I put him on here.  That’s all.

Thanks for checking out the Week 3 rookie review.  If you guys have any comments or suggestions to make this piece better, let me know! Don’t forget to check out the rest of our dynasty content at The Fantasy Authority for more info on the rookie mentioned in this article.