If you want to know what is going on, all you need to do is keep your ear to the ground. The NFL has trends that move very quickly, and if you can pick up on them earlier rather than later, it can give you a distinct advantage in fantasy football. This requires watching games, listening to what others are saying, and looking at statistical trends.

In this article, I will touch on some of the recent trends in the league, and what they mean for fantasy football. I will use a four-week span a lot (weeks 7-10) as enough of a recent sample size to classify certain actions as trends. Buckle up, here we go!

CJ Prosise isn’t going away when Thomas Rawls comes back

Year after year, the Seahawks get off to a slow start, then by the end of the season, they solidify themselves as one of the NFL’s elite few. This year is no different, but this team is different than previous year’s teams, especially on offense. In previous years, it has been the rushing attack led by Marshawn Lynch/Thomas Rawls and Russel Wilson. This season Wilson and Thomas Rawls have both dealt with injuries that have kept them from developing any kind of rushing attack. Christine Michael only had one game over 100 yards rushing (and it came against the league’s worst run defense, the San Fransico 49ers) and he was just cut now that Rawls appears ready to assume the backfield lead again.

Without Wilson’s mobility to extend plays, and the offensive line’s well-noted struggles, the Seahawks have adjusted their game plan to turn Wilson into a quick-read pocket passer. The strategy has worked thus far, and much to the delight of Jimmy Graham, Doug Baldwin, and C.J. Prosise owners. The X-factor is Prosise. Defenses can defend a short-throw passing game if there is no fear of a rushing attack. (Just ask Aaron Rodgers) What Prosise has done in the past three weeks is keep defenses honest. Defense’s don’t need to load the box anymore, but Prosise spreads the entire defense out and creates matchup problems all over the field because he can play receiver out of the backfield better than probably any back in the league. You can line the guy up literally anywhere.

Prosise is not going away even when Thomas Rawls returns . Rawls merely adds an extra dimension to what has become an interestingly dynamic offense. If the Seahawks decide to put both backs on the field, Prosise could give Rawls some weak boxes to run against, and Rawls could give Prosise some great one-on-one matchups with slower linebackers.

The biggest takeaways from this offensive innovation are the stocks of Wilson, Graham, Baldwin, Rawls, and Prosise who are all trending upwards. Watch to see how Rawls fits into this new-look Seahawks attack.

The Packers and Vikings have all but abandoned the running game

For different reasons, the NFC North (outside of maybe Chicago) has completely abandoned the running game. The Lions lost Ameer Abdullah early in the season, but we didn’t expect much from their run game anyway. Theo Riddick has actually been better than advertised. In fairness, the Vikings lost Adrian Peterson, and the Packers lost Eddie Lacy, but both teams possessed capable backups. (at least we thought so)

Let’s start with the Vikings who have Jerick Mckinnon and Matt Asiata. neither has been all that good when healthy, and their yards-per-rush average is a meager 3.16 over the past four contests. Minnesota is averaging 22.25 rushing attempts per game over that span, but it’s been a terrible committee. Matt Asiata is the leader in attempts over that stretch (all Viking losses) and he is only getting 11 carries per week.

A big part of the problem has been the atrocious offensive line play. That’s not an issue you can just wipe up with a paper towel and some kleenex, so this situation may not get better this season. What that means (and has meant) is a ton of passing attempts. Sam Bradford has attempted the 4th most passes since week 7. The Vikings defense has extrapolated the need to pass by cooling off significantly after their blazing start. (Which is a trend in itself worth monitoring) Stefon Diggs has been a fantasy stud over the past few weeks, becoming the first player in NFL history to catch 13 passes in consecutive games. Sam Bradford has been stringing together relevant passing totals. (wait, what?) Kyle Rudolph is a top-10 tight end option. Cordarrelle Patterson has come back to life and is almost regularly flex-worthy. Even Adam Theilen has been getting in on the fun. With matchups against Detroit, Indianapolis, and Green Bay left on the schedule, the time to buy into the Vikings passing options is now. Diggs and Rudolph are almost must-starts, and the other options are at worst stash-worthy in case more players get injured.

Devante Adams has been a different player this season

The Packers actually have a decent rushing average (5.28 yards per rush) over the past four games, but it’s not because James Starks or any other traditional running back has been doing the heavy lifting. Aaron Rodgers has actually been the team’s leading rusher and has accounted for 35% of the team’s yardage on the ground. Ty Montgomery (a converted wide receiver) has accounted for another 31%. Starks has only been healthy for one (their most recent) game, Knile Davis was signed and released. Don Jackson was promoted then placed on IR. This week the Pack even signed Christine Michael fresh off his release from the Seahawks. The Packers sank to a low of 13 rushing attempts (7 by Starks) last weekend in a big loss to the surging Titans.

Unlike the Vikings, the Packers offensive line hasn’t been the problem. Their problem is a lack of healthy running backs and poor coaching. Ty Montgomery is averaging almost 7 yards per carry since week 7. Sure this isn’t conventional power-running, but maybe they should take a leaf from Pete Carrol’s playbook and utilize TyMo in a similar fashion to C.J. Prosise. This would likely help the offense as a whole because of how predictable they are. Luckily for Green Bay, Devante Adams has upped his game, and Jordy Nelson is rounding into 2014 form. Both are basically WR1s right now, and Rodgers is basically un-bench-able. (especially with the rushing statistics he has been producing) If the Packers get any success out of C-Mike, it will be a revelation, but I wouldn’t count on it. Their best hope at the moment is with Montgomery at running back.

The Denver Broncos can be run on

The Broncos may still have the best pass defense in the NFL, but their dominance against the run may well have come to a close. Over the past four games, the Broncos have allowed a 4.88 yards-per-carry average to opposing backs. The Raiders put up 218 rushing yards on the Broncos without an elite back. Denver plays Kansas City, Jacksonville, Tennessee, New England, and Kansas City again before week 17. The Jaguars running backs are the only one’s I would be seriously worried about. Spencer Ware, Demarco Murray, and LeGarrette Blount owners shouldn’t have to worry about whether to play their studs in those weeks.

Williams is set up for a stellar finish

Williams came out of literally nowhere this season and is currently the 13th ranked wide receiver in standard scoring. (17th in PPR) I mentioned him as part of my 2nd team All Fantasy Playoff squad and somehow he is still owned in less than 75% of leagues. What this tells me is that the fantasy community hasn’t really latched onto him yet, and with his ridiculously easy playoff schedule, he should be on everyone’s radar. Over the past four weeks, Williams is 7th in the NFL in receiving yards. The Chargers pass the ball a lot and don’t have a ton of reliable options, so I don’t see this trend going away anytime soon. 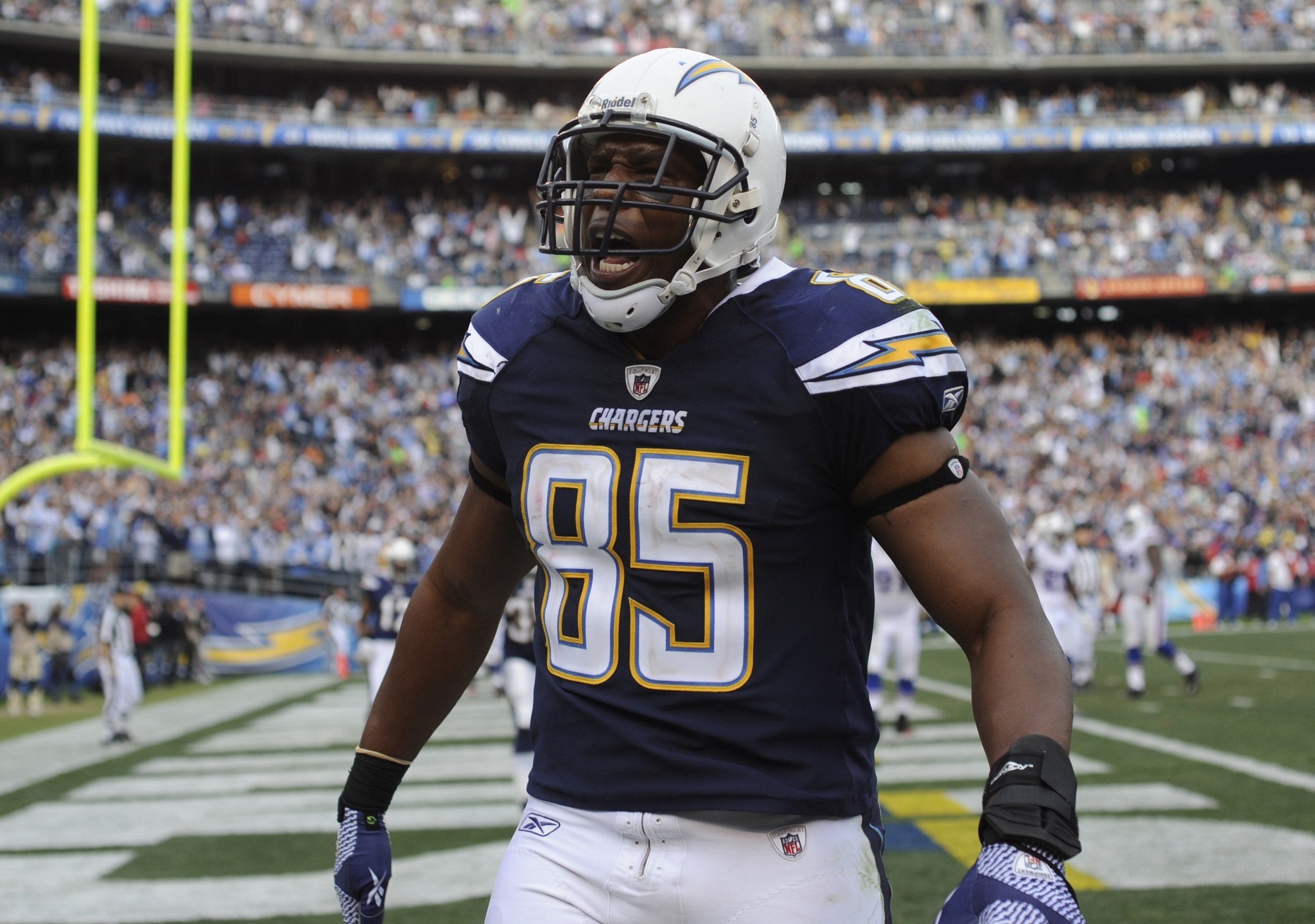 Age is just a number right?

There must be a hidden fountain of youth that NFL tight ends have found. Antonio Gates leads this pack, but Gates, Vernon Davis, and Jason Witten (average age of 34) all are among the top-6 in receiving yards for tight ends since week 7. Gates has 33 targets over that span, which ranks 12th amongst all receivers. Rivers had always trusted him, but I think many like myself in the fantasy community had seen Gates pass the torch onto rookie Hunter Henry. Henry meanwhile has been absent since week 7, catching 4 passes for 41 yards in that time.

So do I keep starting Gates? The answer is yes as long as he is getting his ridiculous target share. Older players tend to fall off as the season wears on, however, so keep an eye out for other options should this play falter.

The Tennessee Titans are on fire, is it time to sell high?

Here’s a statement that I didn’t think I’d be saying after the first few weeks of the NFL season: The Titans are playoff contenders. The AFC (especially the AFC South) is weak this season, and the Titans are only a game behind the division-leading Texans headed by the worst starting QB in the NFL. The problem is that the upcoming schedule is not the greatest. Indianapolis is a cakewalk this week, but then the run stops there for fantasy purposes. Chicago despite their pass defense woes, has one of the better front-7 units in the league and is capable of stopping the run. Then they get a bye week and return with a tough matchup against Denver. Then continuing the AFC west run, they will play Kansas City who may have Justin Houston back by then, and a young (but underrated) Jacksonville team in championship week.

I’m not saying the Titans can’t overcome some difficult matchups, but for a young inexperienced team, I am not buying too hard. I have a ton of Demarco Murray shares, and I don’t see him slowing down, but I would be wary of any assets in the Titans passing game. Rishard Matthews has been buoyed by a high target share and a touchdown-per-game pace but doesn’t have the yardage to back it up. Mariota has looked great, but will he be able to keep up the stellar performances? If nothing else, it’s something to keep in the back of your mind. Nothing would be worse than getting knocked out in the first round of the fantasy playoffs because Mariota struggles against Denver and you failed to line up a backup option for that week.