I have to admit, I’ve had a ton of fun immersing myself in the world of rookie scouting over the past couple of months. I’ve learned a lot about players, and I’ve learned even more about how to evaluate players. One of the attributes that shows up more obviously than others when you are watching video is speed. When you are talking speed amongst this incoming class of rookies, you can’t leave Washington’s star receiver John Ross out of that conversation.

Ross’s combine numbers are important when you evaluate him as a prospect. He’s never going to be a red-zone threat type like Mike Evans or Dez Bryant. The speed is what stands out. Ross’ 40-time set the combine record. This pretty much solidified his status as a 1st round NFL draft pick. His vert and broad jump also confirm his explosiveness that frequently show up on tape.

As I mentioned before, the biggest asset Ross has is his speed. This is obvious in the GIF below as he starts from behind a defensive back at the 25 yard line and has him beat by a few yards before he even gets to the 7 yard line to make the catch.

Plenty of receivers can be quick off the line of scrimmage, but what distinguishes Ross above other speedy receivers is his ability to explode at the top end of routes. Ross can turn on the jets and kick in that “6th gear” at any point in his route to create separation from the defender. His ability to do this reminds me a lot of the way DeSean Jackson runs away from defensive backs in the NFL.

Ross has the ability to cut on a dime, and that I believe (even more than his speed) is what will separate him from a lot of the one-trick ponies out there who can only run 9-routes. Watch in the GIF below as he catches the pass, then stops immediately to avoid a defender, then cuts hard to duck another and then turns a corner and outruns the entire secondary for the score.

Ross is also threat in the return game. He has averaged over 24 yards per kick return over his career for the Huskies and has 4 return scores over his collegiate career. That same elusiveness will earn him extra yards after the catch in the NFL.

One of this biggest knocks on Ross is that he “came out of nowhere” in 2016. It’s true that he never had even close to the stats he had this year previously at Washington, but he also did not play in 2015 due to a knee injury. However, Ross’s explosiveness is still evident in statistics before 2016. He scored 3 of his 4 career return touchdowns as a true freshman and sophomore. He also averaged over 17 yards per reception over that span. 2016 just seems to be where the opportunity met the talent. I will call this a perceived weakness or a concern rather than an actual weakness

Ross is never going to score 14 touchdowns in an NFL season. He’s just simply not the guy who an NFL QB is going to look for first in red-zone situations. This doesn’t take anything away from him as a player that can take the top off of a defense, and he can’t control that, so I won’t hold it against him.

A lot of John Ross’ game is reminiscent of DeSean Jackson. Their speed and separation-creating ability at the top end of routes are very similar. However, the better comparison may be Brandin Cooks. Cooks’ short area quickness and elusiveness probably supersede Ross’ ability to do the same, but they are nonetheless similar in that regard. Like Ross, Cooks is also a burner who can score on any play. Not that they are correlated to anything, but they also both went to school in the Pacific Northwest. 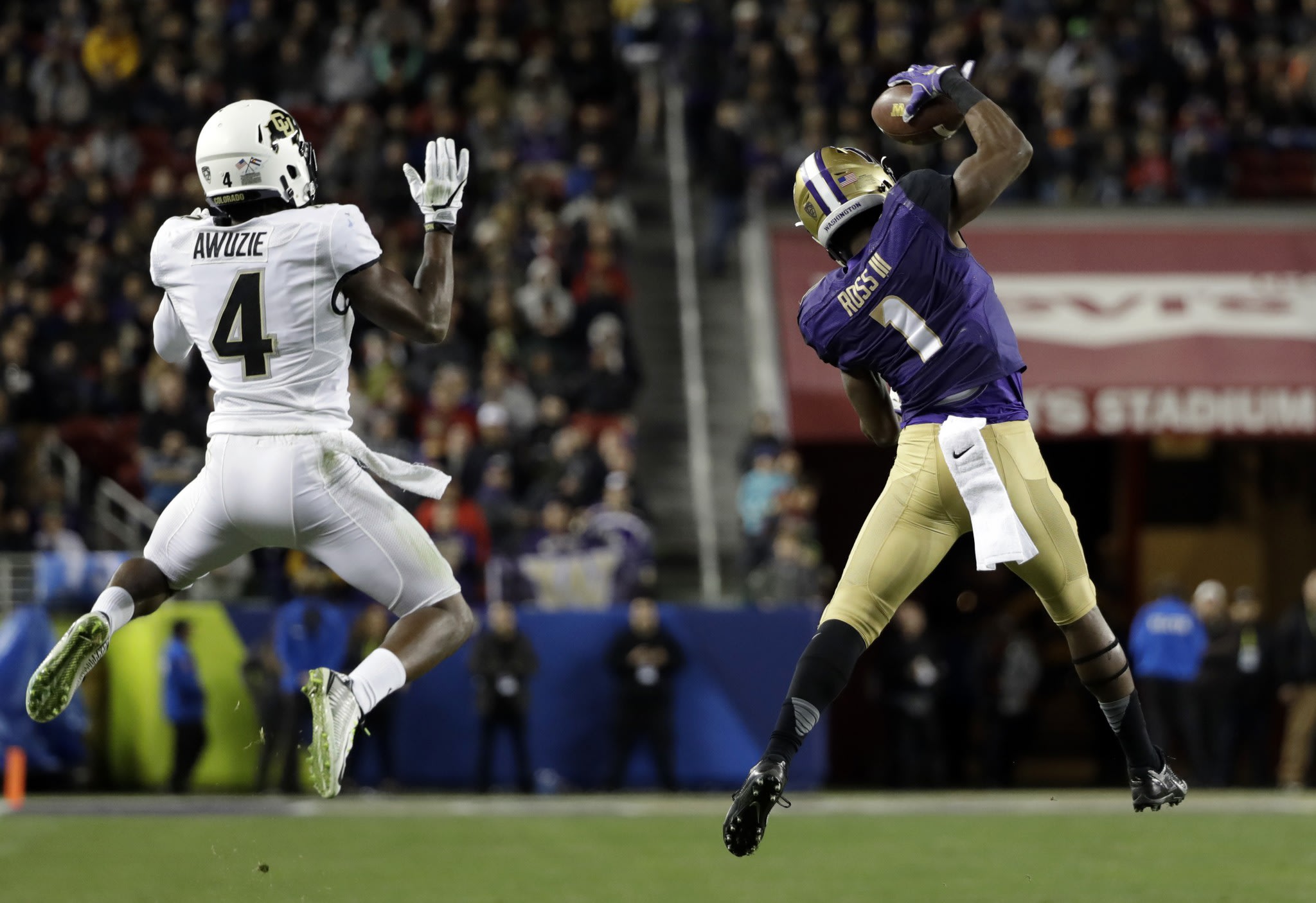 Let me make this clear: I like Ross. He is going to be an asset to whichever NFL team he lands on. However, he may not make the ideal dynasty wide receiver. I have a bias against receivers that hit his profile. This is the playmaking receiver who can sometimes have 4 catches for 135 yards and a score, but also have games where his stat line is 1 catch for 18 yards. That inconsistency will make me hesitant to pull the trigger on him unless he lands in an explosive offense. Players that fall into that category: DeSean Jackson, Will Fuller, Kenny Stills. I don’t think Ross is exactly like any of these prospects, and ultimately the type of offense he lands on will play a huge factor into his career fantasy outlook. His 4.22 speed will get him drafted extremely high, and much will be expected from the speedster.

I have bumped Ross up into the top-5 receiving prospects on my board post-combine. This means he will probably be a mid-first round rookie pick in dynasty drafts. I think Ross could be a WR1 on an NFL team in the mold of a Brandin Cooks role.

Thanks for reading! Want to chat about dynasty fantasy football? Hit me up on twitter here:

What I Look For In a Rookie Prospect: WRs
Pre-Combine Profile: KD Cannon