Now at midseason, running back is sparser than any other position. Only around 12 running backs can consistently be relied on weekly, so finding the other running backs with potential to join this group or deliver for a given week holds great value. Especially as bye weeks effect teams, finding running backs with the most opportunity going forward should not be overlooked. Fantasy championships cannot be won by those without the grit to fight into the playoffs.

The ageless Peterson heads up the opportunity report in week seven. The Redskins use Peterson as their between the tackles bruiser. This backfield has well-defined roles and the Redskins have shown they will not stray from him, but targets will be hard to come by for him. Seeing near 20 touches in every game where he did not sustain an injury, Peterson should rank as a strong RB2 on a weekly basis. In week eight, he takes on the now “Snacks” Harrison-less New York Giants. Harrison is one of the strongest interior run defenders in the league, so with his trade Peterson’s week eight value increased dramatically.

Finally showing up in week seven, Lamar Miller delivered 100 yards and a touchdown. Finding only his second touchdown of the year and the second rushing touchdown by a Texan running back says enough about Miller’s value this year. While seeing the bulk of opportunities on a weekly basis, rarely does Miller return value on these looks. The continuing struggles of D’Onta Foreman maintain Miller’s value as a weak volume play. With no return for Foreman in sight, Miller should continue to see the bulk of looks. Miami’s run defense surrenders yards in chucks to running backs, so Miller may once again deliver an uncharacteristically strong performance in week eight.

Making his fifth appearance in the top 10 opportunity hogs in seven weeks, Barkley returns to the list with another strong performance. Maintaining his pace for over 135 targets, Barkley continues to see extensive work in both the running and passing games. In PPR leauges, Barkley is a menace consistently receiving a number of short looks every week, this week he turned 10 targets into nine receptions and 51 yards. The New York Giant also averages a touchdown a week and this trend shows no signs of regressing. Washington sports a stout run defense, but Barkley has shown he can take advantage of nearly any defense thrown at him.

After LeSean McCoy exited the game, Chris Ivory stepped in as the primary ball carrier. Making the most of his featured role, Ivory pounded his way to 81 running and 25 receiving yards. If McCoy’s head injury keeps him sidelined this week, Ivory should make for a decent play because of his volume. The Patriots will likely blow out the Bills so owners will have to hope Marcus Murphy does not see the bulk of passing down deployment.

Fantasy analysts everywhere talked up Kerryon Johnson’s breakout potential in week seven, and Johnson delivered. Gashing the Dolphins on nearly every carry he received, Johnson ended the week with 179 yards from scrimmage while averaging over eight yards a carry. This game should also serve as a reminder that, while Johnson is the most talented back for the Lions, LaGarrette Blount will serve as the goal-line back. Facing Seattle in week eight, Johnson faces a much more difficult matchup. As a bonus, if Theo Riddick sits another week, Johnson should see the receiving down work once again.

Mack’s emergence continued in week seven seeing the majority of looks in the Indianapolis backfield. At the end of the year, fantasy owners will likely look back on this game as Mack’s most productive. His success may continue for at least one more week though, in a prime matchup. The 1-5 Oakland Raiders have clear holes on defense and Mack will look to exploit them in his next matchup.

While opportunity typically begets production, this is not always the case. Elliott saw 100% of the backfield opportunity for the Cowboys in week seven. Despite a close game and volume, Elliott only managed 42 total yards. Owners should not dwell on this performance too long as it is a clear outlier from Elliott’s track record. The Cowboys have a bye to figure things out and get ready for Tennessee in week nine now.

Week seven shows fantasy owners just how high Kareem Hunt’s ceiling really is. Hunt gained over 140 yards and crossed pay dirt three times. Simply being a part of the NFL’s most exciting offense would make any player hold value, but combine that with extreme talent you have the making of a star. Kareem Hunt is that star, while he may have started slow, he here now. Hunt takes on the atrocious Denver run defense in week eight, so look for his strong run to continue.

The value of the draft James White continues to deliver week in and week out. The Patriots clearly do not view White as a workhorse and rightfully so. White makes the most of each touch and sees high value looks in the passing game. Honestly, White is more receiver than running back at this point. With Sony Michel’s injury, White may be in line for even more work going forward driving his value even higher. Facing the Bills without Michel, White could carry is fantasy owners to victory in week eight.

After the surprising trade of Carlos Hyde, Chubb immediately shot up people’s radar as a priority claim and breakout candidate. Most of the game Chubb struggled, but in the fourth quarter he racked up yards and scored delivering for his owners. Seeing 80% of the work surprised most, as many expected Duke Johnson to see more opportunities. Chubb should be viewed as a back-end RB1 high-end RB2 from this point forth. Pittsburgh has a tough run defense, so Chubb may struggle as an underdog in week eight. 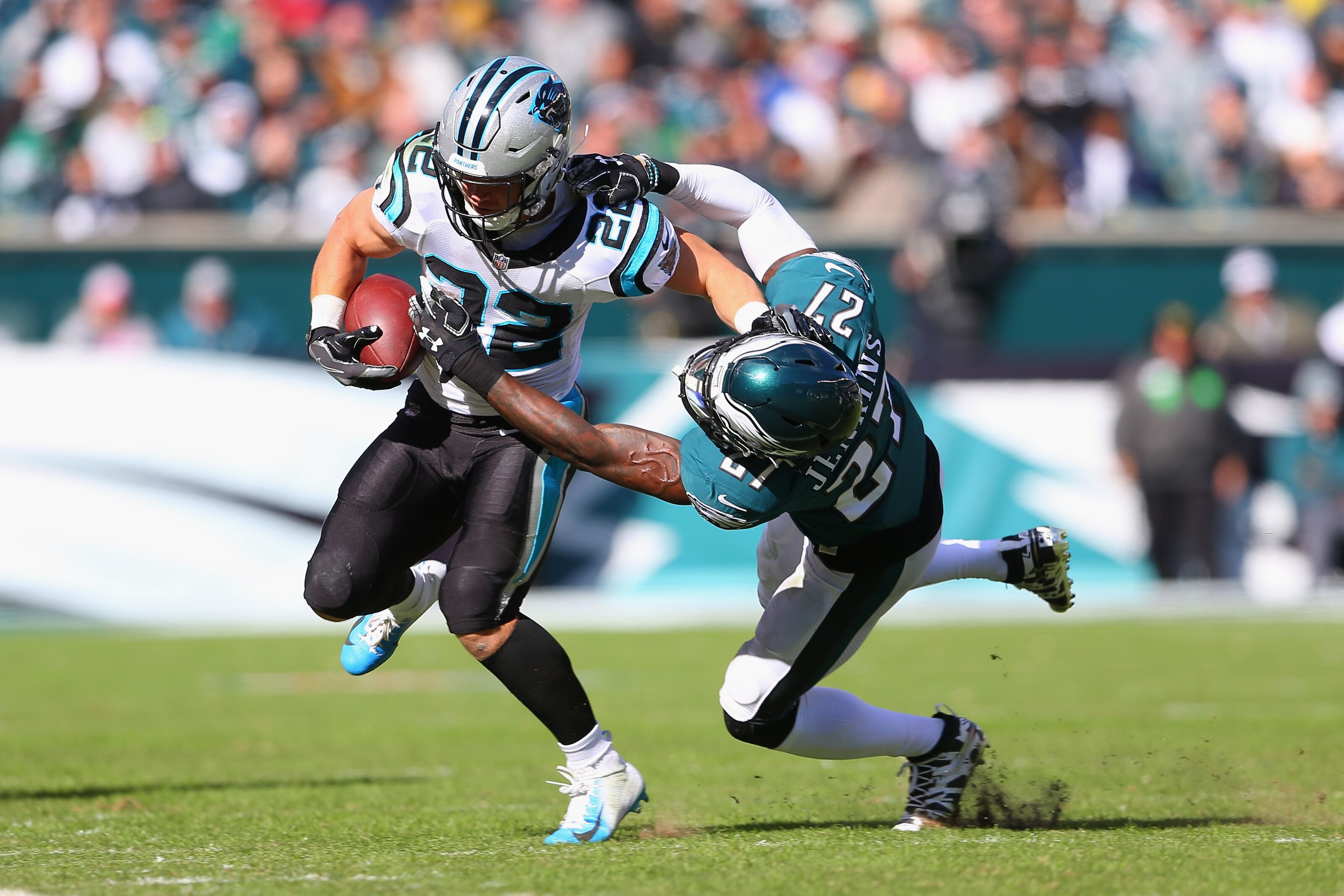 McCaffrey is typically viewed as one of the top running back options, but week seven was a tough week for McCaffrey and his owners. McCaffrey saw 100% of the opportunity and snap share in week seven, an encouraging sign to owners.

Ito failed to deliver on his high billing in week seven. This should not discourage owners from running with him in subsequent weeks though, as he still saw nearly 40% of the opportunity share.

Tarik Cohen consistently makes middling touch totals into serviceable performances. His recent efficiency and performances may be unsustainable, but Cohen should continue to be a serviceable asset.

Brown may not be a startable asset any week, but looking to pick him up soon may be a smart move. Brown has proven that he can be productive when given opportunity, and if anything happened to Gurley, Brown would hold immense value. Hope for the best but plan for the worst.

With Bilal Powel’s IR designation, Cannon will have the opportunity to step up as the second running back in this committee. Importantly, Cannon should see the majority of receiving work between himself and Crowell.

Check out other redraft, DFS, and dynasty content at TheFantasyAuthority.com. For a look at receiver usage in week two, check out Katie Babino’s Target Hogs article. Also, take a look back at last week’s Running Back Opportunity Report to look for trends.