It’s another #TFAthrowdown! In this article we will look at two rookie wide receivers that are getting a TON of hype going into the 2016 NFL season. For this throwdown, TFA Writer Ryan Williams will take the side of Titans receiver Tajae Sharpe, and TFA Senior Writer Zack Marmer will take the side of Giants receiver Sterling Shepard. Who would you take? Let us know after you read with the hashtag #TFAthrowdown on Twitter!

Potential Rookie of the Year

If you didn’t follow this guy in college, guess what? Neither did I. Yeah I’ll admit it. I did, however, go back and look at Sharpe’s stats and my goodness was he impressive. He had 111 catches, 1319 yards and five touchdowns for Massachusetts in his senior year. So it’s no wonder all preseason we’ve been hearing about how polished and “NFL-ready” Sharpe has looked. He stayed in school to get better at his craft and it’s showed. When he was drafted by the Titans back in April, Sharpe talked about how he couldn’t wait to build chemistry with Former-Heisman winner Marcus Mariota. Boy, has it shown this preseason (I’ll get into why I like Sharpe’s situation over Shepard’s below). Look Shepard is nice, and he had all the hype post-draft and OTAs, but this preseason has opened up my eyes to Sharpe. I really believe this back-to-back All-American has the chance to be the NFL Rookie of the Year, given his situation.

I don’t think I need to explain to you the potential upside of Sharpe is due to his situation, but just in case I do let’s take a look at some things. During the 2016 preseason, both with their respective starting quarterbacks Sharpe has seen 12 targets from Mariota, while Shepard has only seen 2 targets from Eli. Hmm…makes you wonder, right? It’s really simple. One player plays with Odell Beckham Jr. (a top three receiver in the league) and the fifth highest targeted running back in Shane Vereen. The other does not. In fact, Sharpe might become the de-facto No. 1 option in his offense which means targets, targets, targets. If there’s one thing I look for when drafting a player, it’s opportunity and Sharpe has all of it. Remember all that hype surrounding DGB for his situation with Tennessee? Well, the Titans traded DGB because of what they saw preseason week 1 from Sharpe. The only other player he has to compete with is Delanie Walker and I think that’ll affect his redzone production more than anything. Advantage, Sharpe.

I’m going high with Tajae’s numbers here but I’m projecting him to get: 80 catches, 1,000 yards and seven touchdowns. I really believe he has a chance to finish as a WR2 and he’s getting drafted in the 11th round; Ultimate value for the situation he’s in. He has an incredible route tree, great hands, and is dynamic with the ball in his hands. From a metrics standpoint, Shepard does look more appealing than Sharpe.(18.1 yards per reception) However, Sharpe is 3-inches taller and had a breakout age at 18 (94th percentile for the position). I really worry about Shepard at his current ADP of WR37, going in round 7. I know one reason many people jump on that is they’ve seen Rueben Randle in the past two seasons get 100 targets and finish as a top-40 WR. Maybe that will translate for Shepard and depending on your roster by round seven, Shepard could be a great addition as WR5. But I caution people taking Shepard as a WR3 when Sharpe is sitting there four rounds later. 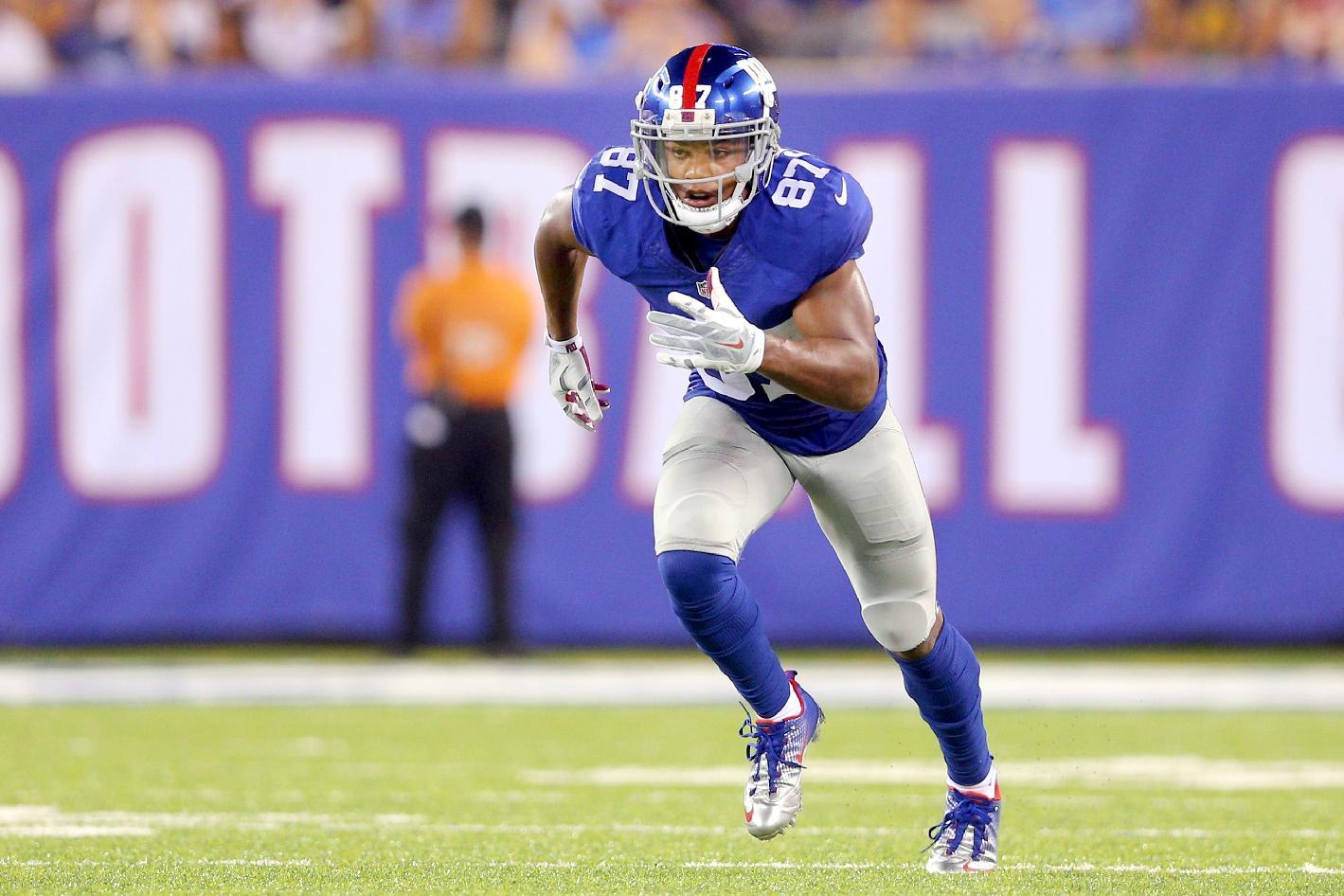 Is Shepard the Answer for the WR2 spot in New York?

Neither of these players are freak athletes. Shepard is listed at 5’10” and 194 lbs. Shepard will make his money in the NFL because he is already a polished route runner. The trait that translates to the most early success for wide receivers coming into the league is route running. Many receivers these days are built like NBA small forwards, but they lack the agility and footwork to make an immediate impact in the NFL by creating separation from the defensive back. That’s not a problem for Shepard, as he will find ways to get open on a variety of routes that he has been mastering throughout his collegiate career at Oklahoma.

The former 2nd-team All American also has reliable hands and has never really struggled with drops. New teammate Odell Beckham Jr. has highly praised the rookie, and he has drawn favorable comparisons to Tyler Lockett of the Seattle Seahawks.

Shep could not have landed in a better situation in New York with the Giants, and that is why many are very high on him coming into his rookie year. In camp, Shepard won the starting role opposite OBJ, and hasn’t looked back. The Giants are a team that made improvements on the defensive side of the ball, but they still look like they won’t have a threatening run game. This means they will still have to pass a lot to win football games. With defenses likely to be keyed in on Beckham, Shepard will see a ton of single coverage looks that will allow him to get open early and often. Look for Eli Manning to build trust quickly with the rookie, and get him the ball frequently.

Sharpe may be a starting wide receiver as well, but the Titans want to run the ball. If the game is remotely close, Tennessee is going to move the offense through either the 2014 NFL leading rusher, (Demarco Murray) or the 2015 Heisman Trophy winner. (Derrick Henry) Sharpe has looked great in pre-season, but once the regular season is under way, the true nature of the offense will seriously hinder Sharpe’s upside. Shepard doesn’t have this problem which gives him a higher ceiling overall.

The newest Giant’s starter is more explosive than you may think, (he had a 41 inch vertical at the NFL Scouting Combine) and is ready to show the world he is a surefire professional. Expect him to put up WR3 numbers for your fantasy team and provide the upside of a WR2 some weeks when defenses double cover OBJ and/or they must play from behind. If Beckham got hurt, Shepard would be a solid WR2 immediately.