Welcome to the Week 10 edition of QB and DST Streaming Options from The Fantasy Authority. With another four teams on bye, it’s most important to make wise decisions when choosing the correct quarterback/defensive streamer. It can lead to fantasy victory or soul-crushing defeat.

Let’s check out my QB and DST Streaming Options for this week!

As for last week’s results, Beathard couldn’t play Thursday night due to an injured hand. Carr was a virtual tackling dummy for the Niners defense. Fitzpatrick was up and down with 4 touchdowns but also 2 interceptions. Flacco struggled against the Steelers pass rush without his starting offensive tackles. Alex Smith finally managed to throw for 300 yards—albeit in a Redskins defeat. Dak Prescott was solid in the Cowboys loss on Monday night.

Here are the complete numbers from my Week 9 quarterback selections:

C.J. Beathard– DNP due to a wrist injury

Smith had his first 300-yard game in Week 9 against the Falcons and looks to build upon said performance. Even with the yardage, Smith only was able to get one touchdown along with one interception. At this point in the season, he’s purely a matchup option due to his relatively low ceiling.

As for his Week 10 opponent in the Tampa Bay Buccaneers, the matchup couldn’t be any better for quarterbacks. For the year, Tampa is 32nd in touchdowns allowed (22), 32nd in interceptions (1), and 30th in passing yards allowed per game (307.1). In addition, the Buccaneers have allowed the most fantasy points per game to quarterbacks—this defense is HORRIBLE!

If there’s ever a time for Smith to score 20+ fantasy points, this would be the game for it to happen.

What a surprise Mullens was Thursday night when he filled in for starter C.J. Beathard. An undrafted free agent from 2017 who was promoted to the active roster when Jimmy Garoppolo was lost for the season. He threw for 262 yards and three touchdowns in his first career start. Barring some sort of medical miracle from Beathard, Mullens will be the starter for Monday Night Football.

His Week 10 matchup against the New York Giants is favorable as the Giants are 28th in defensive efficiency, 27th in pass defense efficiency, and 31st in sacks (10).

Mullens is a great add in deep leagues or 2QB/Superflex leagues for your fantasy team.

Sunday’s contest marked Mayfield’s third consecutive game with two touchdowns passes, though he also turned the ball over for the second straight game. With a new head coach and offensive coordinator, Mayfield had his highest completion percentage (69.0%) of the season. It’s hopeful that Baker will continue to show steady improvement in future contests and become a fantasy asset.

In Week 10, the Browns welcome the Atlanta Falcons to town who are coming off a victory in Washington. The Falcons should be a great matchup for Mayfield due to their rather suspect pass defense. Placing 31st in opponents rank versus quarterbacks, 31st in defensive efficiency, and 28th in defensive pass efficiency, Atlanta is a veritable fantasy gold mine for offenses.

Mayfield isn’t likely to be a big scorer, but he can live in the 17-20 point range in matchups like these and help managers in need of a replacement. 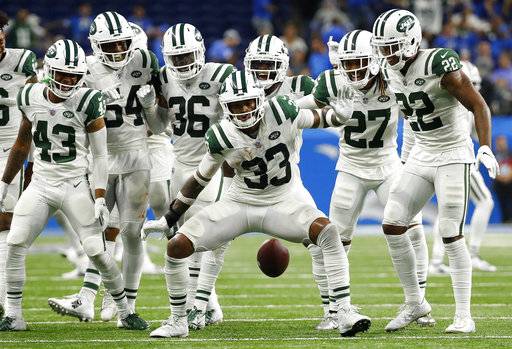 The Jets will be playing at home against the Buffalo Bills. That’s a good enough reason to make them a top streaming option for Week 10. Nathan Peterman struck again with three interceptions which included the obligatory pick-six. Regardless if its Peterman or Derek Anderson who’s the starter, Buffalo’s offense has been anemic—which is being kind.

Ranking 9th in takeaways (15) and 8th in interceptions (10), New York has been an opportunistic defense—despite the poor record. Add in 22 sacks and this has all the ingredients for a solid DST streamer.

Despite not registering a sack or interception against the Raiders before the bye, the Colts still have a great matchup in front of them for Week 10. They’ll get a home contest against the much-maligned Blake Bortles who’s responsible for 13 total turnovers. For the season, Indianapolis is 6th in takeaways (16), 11th in interceptions (9), and have 22 sacks.

Now, the Colts upside might be limited due to the possible return of Leonard Fournette, but the potential for the Bortles train to go sideways always looms. I wouldn’t expect fireworks, but you could do much worse if streaming from a low waiver position.

This selection is matchup based due to the uncertainty at the quarterback position for the Miami Dolphins and the lack of recent production from the Packers defense. Whether it be Osweiler or Tannehill under center, the Miami offense has struggled all season to show consistent offense. Ranking 22nd in overall offense, 23rd in passing offense, and 24th in scoring shows that Miami is just mediocre.

As for the Packers, since their dominating effort against the Bills, Green Bay has allowed over 27 points the last three weeks. Despite those recent efforts, the Packers still have the 8th best pass defense in the league are also 6th in sacks (25). Green Bay might not have the highest ceiling, but the matchup puts them squarely in the streaming territory for Week 10.

The Chargers are resurgent at last. They’re red-hot right now, with double-digit fantasy points in three of their last four games. Los Angeles has tallied at least one interception in every game going back to Week 2 and racked up 14 sacks over the last four games—all without Joey Bosa.

Traveling to Oakland for a Week 10 contest, the Chargers will be facing a Raiders offense that just managed to score 3 points in Week 9. For the year, Oakland is 28th in scoring offense (17.6)—not a unit to be feared at all.

Deploy the Chargers DST as a streaming option with confidence.

The Niners will be hard pressed to duplicate their eight-sack game from last week but if there’s an opponent that can make it happen, it’s the New York Giants. Eli Manning’s struggles have been well documented and it’s unlikely they’ll be fixed after one week of practice. While the sacks have been apparent (24, 10th in the NFL), the takeaways (5, 32nd in the NFL) haven’t been.

San Francisco isn’t a high-end defensive unit but based upon matchup alone, they could get you a few fantasy points if needing a streamer for this week.

Good Luck to all fantasy managers in Week 10! And remember: #FortuneFavorsTheBold

Thank you for taking the time to read my QB and DST Streaming Options article and hopefully my selections will lead you to fantasy prosperity! Also be sure to read Matt Lo’s waiver wire rankings article as he ranks which players you should be targeting along with my streaming options. As always, feel free to check out all of the fantastic and outstanding content at www.thefantasyauthority.com.