This Week 15 tight end analysis article explores the difference between expert consensus rankings (ECR) and projected PPR stats (both per www.fantasypros.com). I’ll also offer my insight on their weekly match-up, along with whether or not they can beat their weekly projection.

Gronk was suspended for week 15, so he’s going to be well rested and anxious to play. He has a very tough opponent this week, as the Steelers are the top-ranked TE defense in the league. They allow a paltry 8.7 PPR points/game to TE. Opposing TEs eclipsed 60 yards only four times against the Steelers this year, and they’ve allowed a league-low two TDs to tight ends thus far. Furthermore, their pass defense as a whole only allows 201 passing yards per game, fourth in the NFL. Still, Gronk will be heavily involved in this game with shootout potential, as both teams are vying for the #1 seed in the AFC. I think Gronk performs well and finds the end zone this week. This is going to be one fun game to watch.

Kelce caught 7-of-13 targets for 74 yards in their week 14 win over the Raiders. Kelce finished as the #1 targeted receiver on the Chiefs and had two touchdowns nullified on the day. One touchdown was ruled down at the one-yard line, and the other was nullified by a penalty. He faces another difficult test heading to the Chargers on Saturday night. The last time he played them, he was held to a one catch, one yard performance. This time, the Chiefs are going to come to play and will keep Kelce involved throughout the game. I think Kelce gets into the end zone this week, after being held out last game. While the Chargers are a strong defense, they’ve given up 2 touchdowns to TE in their past 3 games, after allowing only 1 TD all year previous to week 13.

Graham has held off the scoresheet in week 14 against the Jaguars, catching 0-of-2 targets. Prior to that, Graham scored in four straight games. His dud performance was likely due to the strength of the Jaguars secondary, forcing Russell Wilson to try and beat them with long throws. As said before, Graham is heavily dependent on red zone production, so this was somewhat foreseen. This week, he faces the Rams, who were just torched by the Philly tight ends in week 13 for three touchdowns. Furthermore, the last time Graham played the Rams in week five, he caught 6 receptions/37 yards/1 TD. I think Graham bounces back and gets into the end zone again this week, but is a far more volatile option than most tight ends.

Rudolph caught 3-of-5 targets for 41 yards and a TD against Carolina in Week 14, continuing his touchdown streak. He now has 4 touchdowns in his last 3 games, while averaging 3.6 receptions and 46.6 yards in those games. Furthermore, he has at least 4 catches in 8 of his last 9 games, giving him a very stable PPR floor with great TD upside. His opponent this week, the Cincinnati Bengals, allow an average of 12.1 PPR points/game to TE. While they have played decent TE defense as a whole, the Bengals seem deflated and appear to have given up on their season. Given his red zone role and stable PPR floor, I like Rudolph’s chances of keeping his TD streak alive.

After missing Week 14 due to having “dull headaches” from a concussion sustained in Week 13, Ertz is on track to play Week 15. He cleared concussion protocol once again and figures to start practicing this week. It’s perfect timing for fantasy owners as well since he goes up against the worst TE defense in the league, the New York Giants. They allow a staggering 17.2 PPR points/game to TE, along with a league-worst 11 touchdowns. If Ertz is cleared to play for week 15, I like his chances of beating his projections with a very solid PPR performance.

On a snowy day in Buffalo, Doyle managed to escape with a decent fantasy line, catching 2-of-3 targets for 4 yards and a touchdown. Neither team completed a lot of throws on the day give the conditions, instead choosing to rely on their respective run games. Doyle plays the Broncos on the Thursday night game, who have been awful against the TE this year. They allow 63.2 YPG to TE, along with 14.9 PPR points/game and eight touchdowns to tight ends. Doyle hasn’t been the most reliable receiver but is a match-up based TE play. With a plus matchup against the Broncos, I think the Colts rely heavily on Doyle and stay away from the Bronco corners.

Cook bounced back after two dud games, catching 5-of-6 targets for 75 yards and a TD in Week 14. Cook has been a low floor, high ceiling TE all season, with wildly inconsistent production. This week, he faces Dallas, who allow 12.6 PPR points/game to TE. In a Sunday night game, I think they try to keep Cook involved, but he easily could come up with a dud. I’ll project him for a stable fantasy production day, but I would not count on the touchdown, as he’s only scored twice this season.

Ebron had a huge week 14 against Tampa Bay, catching 10-of-11 targets for 94 yards. He now has at least four catches in the past four games, giving him a somewhat stable floor. Given his production prior to the unexpected breakout game, I would temper expectations for Ebron against a tough Chicago TE defense. They allow only 10.8 PPR points/game to TE, along with only 3 TDs to tight ends. Ebron is a risky streamer but should have a decent fantasy floor with receptions.

Davis caught 2-of-7 targets for 26 yards and a touchdown against the Chargers last week. He was the most targeted receiver on the Redskins and was open on some throws that Kirk Cousins missed. With Jordan Reed finally going on the injured reserve, where he belongs, I like Davis to continue flourishing in a TE1 role. Arizona is a tough match-up but allows 11.6 PPR points/game to TE, so I think Davis has a decent fantasy day against them. 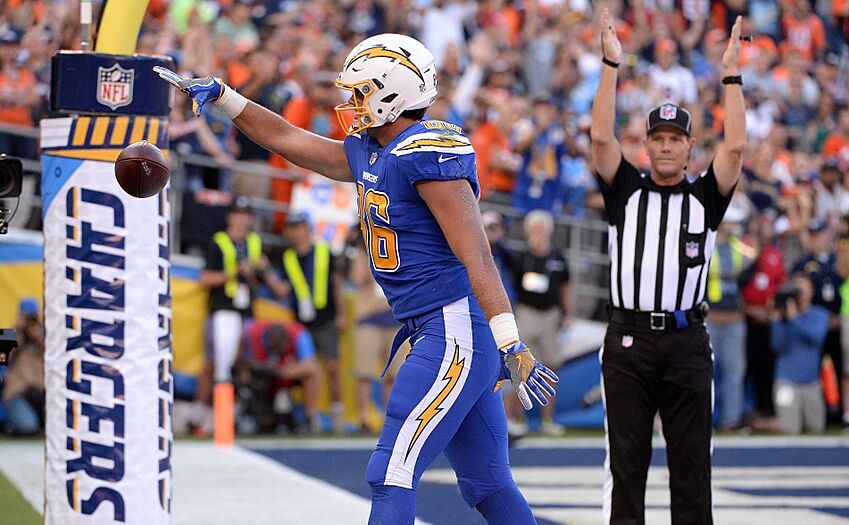 Walker caught 5-of-6 targets for 42 yards in Week 14 against a tough Arizona defense. In what has been a tough year for Tennessee and their offense, Walker has been quite consistent. He now has at least four receptions in his past eight games, giving him a stable PPR floor. His opponent, the SF 49ers, allow an average of 10.6 PPR points/game to TE. They allowed six touchdowns on the year to TE, but are first in TE yards per game, giving up only 33.9 YPG to tight ends. I like Walker to continue his PPR production based on his role and floor, but I would expect a similar performance to last week. The Titans offense has not looked right all year.

Henry caught 4-of-6 targets for 50 yards and TD against the Redskins, continuing his TE1 level of play. He now has at least four receptions/50 yards in his each of past three games, along with two touchdowns. I would give Henry a decent floor of 9.00 PPR points given his play of late, with a decent shot a TD each week. In Week 15, he faces a difficult Kansas City TE defense in the Saturday night game. They allow an average of 10.4 PPR points/game to TE, along with only giving up two touchdowns to TE. I think Henry stays involved due to his usage, but I find it hard to expect him to score this week. If Henry does beat his projection this week, it’ll be with yardage. I think he ultimately falls short of his projection, but it’s going to be close.

Engram caught 4-of-7 targets for 54 yards in a Week 14 loss to Dallas. The return of Eli Manning has been okay for Engram’s production, but the Giants offense as a whole seems to still be sputtering. This week, he faces the Eagles, who allow 11.4 PPR points/game to TE. The Eagles TE defense has been extremely solid as of late, allowing an average of 27.3 YPG over their past 6 games, along with a single touchdown. I think Engram will receive a healthy dose of targets in this offense, but I ultimately think the rookie falls short of his projection. I just can’t seem to put good faith in a struggling Giants offense against a tough Philadelphia defense.

Witten salvaged his fantasy day, catching 1-of-2 targets for 20 yards and a touchdown in Week 14. His catch came with 7 mins left in the fourth quarter and was ultimately his only production for the day. He now has consecutive weeks with a single catch for a touchdown, so it’s hardly a stable fantasy floor. He does draw the Raiders this week, who allow 14.6 PPR points/game to TE and the second most points to the position over the past 6 weeks. So basically, they were roasted by TEs recently. Witten does not have the most stable production or target share, so I’m hesitant to give him a solid recommendation. I do think he does get more involved this week, but I doubt he scores again. He’s a low end TE1 flier based on the match-up only.

Olsen is slowly returning from the foot injury that kept him out for a majority of the season. He did play 92% of the snaps against the Vikings in Week 14, even though he failed to catch a single target. While his role will likely expand going forward, I doubt he produces against a tough Green Bay TE defense. They allow the second-best 9.4 PPR points/game to TE position and have stifled opposing TEs all year. Look elsewhere for a TE streamer this week.

Clay caught 2-of-5 targets for 11 yards in last week’s snow bowl against Indy. Buffalo is unsure what quarterback they will be using for Week 1 after Nathan Peterman went down with an injury as well. Given the recent play of Buffalo, plus the uncertainty at quarterback, I would recommend not starting Clay this week, regardless of the match-up.

Check out The Fantasy Authority for weekly content to help you win your fantasy playoffs! Follow me on Twitter @TFA_Andrew for fantasy advice and goodluck this week!